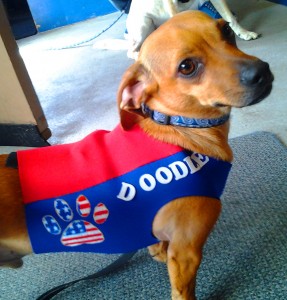 This is a Vancouver/Columbia Gorge surf doxie in training – last seen riding a carry on bag out of PDX, bound for Southern California. Doodle’s surfin’ safari led him away from the coast- to the CA/AZ desert, for river surfing… behind a ski boat… on the Colorado River.

And, well, it’s a good thing the doxie got a wetsuit made – and has a dinky doxie PFD (personal flotation device.)

See for yourself in this You Tube video:

That’s the great thing about water wipeouts. They look awful but they feel great.

So he’ll be back on the board again – next time, for a remarkable ride. Stay tuned right here.

PS – we have to find a river surf crew right here in the ‘Couv. Let us know if you know of a boat owner or a water ski club. See ya on the water!