THE WAR OF THE DEAD 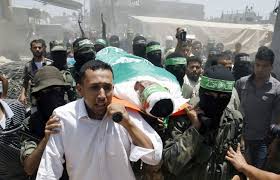 “THE ISRAEL-GAZA CONFLICT” is how the networks bill what’s transpiring in that corner of the world. While the phrase “cease-fire” is repeated quite often, the scenarios which most personify the situation are the moving pictures of Palestinians parading dead bodies through the streets of their bombed-out landscape. Hamas resorts to such ploys because their combatants are no match for Tel-Aviv’s military. So they concentrate on the propaganda war. If you follow the crisis on “social media,” you might conclude that they’re winning. You see a lot of that kind of reaction reading the comments of NBC Mideast Correspondent Ayman Mohyeldin on his Facebook page. And as I watched one such video on CNN, I realized that this is not the first time that The Departed have been employed to propagate a cause. The struggle against the Islamist occupation of Spain, for example, was essentially decided by a warlord named El Cid who led the Roman Catholic forces against the Jihadists of the day strapped dead to his steed. Seven centuries elapsed before the alien followers of Mohammad were expulsed. Charlton Heston starred in a spectacular 1961 movie version of the era. It was just the opposite of the on-going confrontations between Israel and Palestine which started around 1950. THE MUSLIM INVASION of the Iberian Peninsula began in 711 when the first contingent of some 50,000 Moors crossed the Strait of Gibraltor. Unlike today’s flying rocks-versus-guided missle hostilities, “The Reconquest of Spain” was mainly promulgated by noblemen-led peasants with spears dueling bow-and-arrow equipped horsemen from North Africa. In any case, it’s worth remembering that even though Arabs now complain about Jewish occupation, THEY once occupied Christian lands. So don’t consign to the grave the possibility that another cadaver will emerge triumphant!