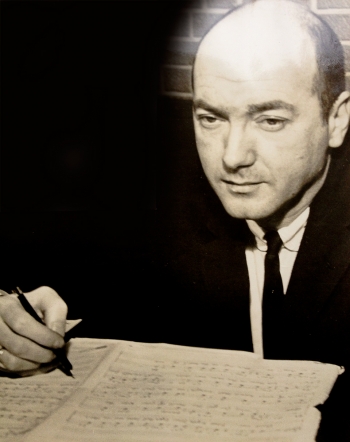 REG FULTON passed away on Oct. 28, 2013. A friend of mine who was the composer’s neighbor in San Francisco gave me the news. You probably never heard of Reg. In fact, no one even bothered to sign the Guestbook on Duggan’s Serra Mortuary on-line funeral notice. But he’ll forever be associated with Spokane’s Expo ’74 — an even less-remembered event. Its theme was “Celebrating Tomorrow’s Fresh New Environment.” The IMAX movie theater made its debut there, inside the United States Pavilion. Five million visitors swung by. After the fair closed, the site became Riverfront Park. Only the Sky Ride chairlift and The Carousel remain. In any event, Reg Fulton wrote the music for an album entitled, “EXPO’74. World’s Fair Spokane USA. May-Oct. 1974.” It sold 5,000 copies. One of the tracks was called, “Yes, You Can in Spokane.” It was performed by Bob Bellows. The City Council had pins made up with that line. Here’s an audio clip: http://www.expo74.com/spok1.mp3 So much for paying homage to the past… THE GRAND BUFFET in Rochester, WA is where I had Thanksgiving Dinner. Besides roast turkey, they served oysters on the half shell, grilled rib-eye steaks and Mahi-Mahi. They say it’s the best buffet in the state. I stayed at the Lucky Eagle Hotel where — along with a key to your room — you receive the latest edition of The Olympian. I spent the afternoon rummaging through five pounds of Black Friday promotions, including a 50-page SHOPKO supplement and a JCPenny flyer headlined “Jingle Like Your Last Name’s Kringle.” One of the more interesting offers was a FREE (with a $20 purchase) Downtown Abbey Tote Bag from COST PLUS World Market emblazoned with this message: “I’m an American. I don’t share your English hatred of COMFORT.” This year, even Goodwill Industries cashed-in with a 44″ Light-Up Outdoor Seahawks Santa Lawn Figure. They didn’t specify if it was new or used. Even PETSMART got into the act, extending a 50% discount on all PET HOLIDAY dog or cat apparel, collars and toys. PIER 1 Imports resorted to sacriledge, labeling its sale “HAPPY HOLLY DAYS.” To be fair, I didn’t see a single blurb which mentioned The Star of Bethlehem. Christmas was banned throughout Russia after the 1917 Revolution. When Macy’s first opened, a five-pointed Red Star became part of its logo. However, during World War II and until the fall of communism, it was most recognized as the Red Army’s symbol. Under Cold War conditions, a red star would have been a poor choice as the brand for a capitalist institution, so they made it white. It wasn’t until 1992 that the holiday was openly observed. The current 70-page Macy’s insert doesn’t contain any merchandise with a religious tie-in. Ironically, though, XMAS is again celebrated in grand fashion in the former USSR where the faithful assemble in incense-filled cathedrals. Once the first star appears in the sky, festivities begin. Hay is brought forth as a reminder of the poverty surrounding the manger where JC was born. And on the Feast of the Nativity they don’t go shopping. Rather, neighbors visit each other — eating, drinking and singing carols all day long. Proof-positive that what goes around comes around? My mother {R.I.P} used to wait for the JANUARY WHITE SALE. It kicks off at the conclusion of the 12th day of Christmas.