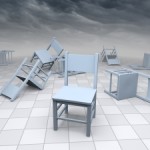 Whenever I have the opportunity to speak to groups on fitness, audience members are usually well-armed with pen and pencil.

Like any subject that has an academic side, success is derived by deconstructing complicated information in a way that makes the subject easy to understand and easy to remember.

To that end, my thoughts of what really make a fitness plan effective, is not that it is systematized in an easy to remember order, but conversely, it resembles more of a chaos where muscle groups are worked in a randomized fashion, versus “a” first, then “b”, then “c.”

In the body-building world, there are myriads of information about sequencing of training days, such as  “push-pull day” or “arms-shoulders” but as one delves past the first layer of information there is increasing credence to the cliche’ of “muscle confusion.”

Very simply, the implication behind muscle confusion transcends the mere changing of the order of movements.  In it’s perfect form, it can also mean changes to the speed, weight, range of motion, number of joints involved such as ankles, knees and hips , type of resistance (pulling a weight behind you, versus performing a squat are two very different types of resistance) repetitions and various tweaks to the planes of motion, all playing a cumulative role in not only building muscle, but dictating how that muscle is used.

A simple example of one aspect of muscle confusion would be pulling an object out of the ground until it yields.

While it represents a specific kind of strength over resistance it is not the only way in which these two forces are used.

The physical challenges one either plans (like having to pull a root ball out of the ground – grueling) or doesn’t plan support the importance of spontaneous and randomized training.   It only stands to reason that the  “zen” in fitness training should not follow a prescribed order either.

Using a sports analogy of “practice the way you play” most accurately describes the comparison for the way a person trains and the resistances they encounter in every-day living.

Many  fitness enthusiasts and trainers like to record their progress as it relates to weight, sets and repetitions as a way of measuring progress, however the progress is only relative to the same kinds of resistance.

When was the last time you pushed yourself to perform a completely “thought of the moment” series of exercises that had nothing to do with a prescribed order?

When I work with my clients, I characterize this as “chaos 30″, which loosely translates into performing a spontaneous and randomized set of exercises that require good mechanical (bio-mechanical) form for 30 action-packed and unpredictable minutes.

This method of training doesn’t eliminate the use of machines, but instead treats them like one of the many tools found on a Swiss Army Knife.  The “Chaos 30″ can include calisthenics, swinging of implements (tires, sledge hammers) , machines (cardio and resistance) that define movement patterns and planes, elastic bands and countless other fitness tools.

The beauty of this kind of training is that rarely are two work-outs ever completely the same, and decreasing recovery times alone, can prevent adaptation that decreases the work-outs effectiveness.

My vote? Once you develop your growing work-out menu, go to your next work-out with only one plan – that you will create chaos in your work-out which will get you to a whole new level of fitness.