Go to Columbian.com
Paleo in a Pinch 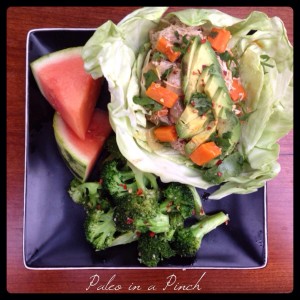 It’s no secret our household is crazy {like, really crazy} about the Portland Trailblazers.

In fact, we’ve only missed one game this season. We were staying in Government Camp and apparently Comcast isn’t very popular on Mt. Hood. We know because we called every restaurant in town to see if the game was playing. It wasn’t.

Blazers lost that game. {I’m pretty sure it’s because we weren’t watching}

So, when the Blazers made it to the playoffs and we were in Cabo San Lucas for our 15th wedding anniversary, it was a no-brainer that we’d find a place to watch the game. {we wouldn’t want them to lose, right?}

We found ourselves at the only brew pub in all of Cabo, watching the first two Blazer playoff games. Yes, we went to the same bar twice. In Cabo. On our anniversary. {who cares about romantic dinners and long walks on the beach when the Blazers are in the playoffs?! not me}

Now that the Blazers have advanced to the semifinals, it’s time to get serious. {and, I mean s.e.r.i.o.u.s.} Bust out your crockpot and invite the neighbors over. We’re gonna turn up the heat.

** Tessemae’s all natural dressings, marinades and spreads can be found online and at select grocery stores (I’ve had good luck finding Tessemae’s in the refrigerated section by the produce at Whole Foods). Click on the following link to find a store near you: http://www.tessemaes.com/apps/store-locator

1) Place carrots, celery and onion in the bottom of a crockpot. 2) Layer chicken thighs on top the veggies and pour Tessemae’s Hot Wing Sauce over chicken. Place lid on the crockpot and cook on low for 6-8 hours. 3) When chicken has cooked for 6-8 hours, take two forks and shred chicken inside the crockpot.

4) Gently peel cabbage leaves one at a time, wash if necessary.

5) Using a slotted spoon, place chicken in the center of a cabbage leaf. {be sure to strain well} Layer with sliced avocado, fresh cilantro and a pinch of crushed red pepper. Tuck and roll cabbage the best you can, around chicken.