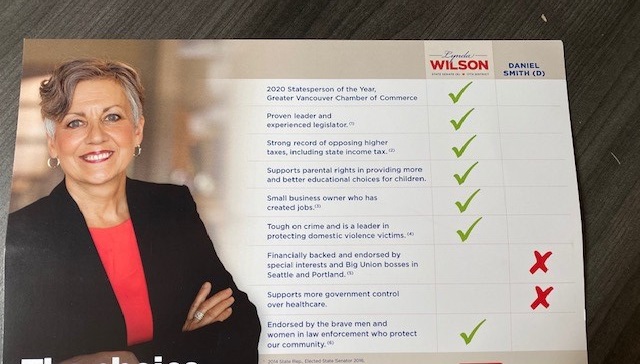 A campaign mailer for Sen. Lynda Wilson, a Republican who represents the 17th Legislative District in Olympia, displays a checklist designed to draw a contrast between herself and her opponent, Democrat Daniel Smith.

Wilson’s column includes a check mark next to statements like “Proven leader and experienced legislator,” “Strong record of opposing higher taxes” and “Small business owner who has created jobs.” On Smith’s side of the list is a mark indicating that the Democrat is “Financially backed and endorsed by special interests and Big Union bosses in Seattle and Portland.”

The mailer drew the ire of a local union leader, who did not appreciate being referred to as a “boss” in campaign materials for a state legislator. In a letter titled “Setting the Record Straight,” Shannon Myers, president of the Southwest Washington Central Labor Council (who endorsed Smith), said she was tired of unions being attacked by elected leaders.

The mailer (and Meyers’ response) made me curious as to how big of a financial player unions are in the state legislature race. So, while we’re on the subject — who is financially backing these candidates?

Those are fairly even fundraising totals between an incumbent and a challenger. Especially considering that Wilson beat Smith by more than 10 percentage points in a primary election that served largely as a formality, as they were the only two candidates on the August ballot for the LD-17 senate race.

I’m not going to speculate if the incumbent will hang on to her commanding lead in the general election. But it is worth noting that Smith’s campaign is getting a boost from Gov. Jay Inslee, who plans to hold a virtual event over Facebook Live with the first-time candidate on Saturday. It’s an unusual move for the governor, who doesn’t usually get involved in state legislature campaigns in southwest Washington. Inslee’s event also follows a viral video of Smith’s wife being berated by a passerby last weekend while passing out campaign fliers.