You, me and the TPP 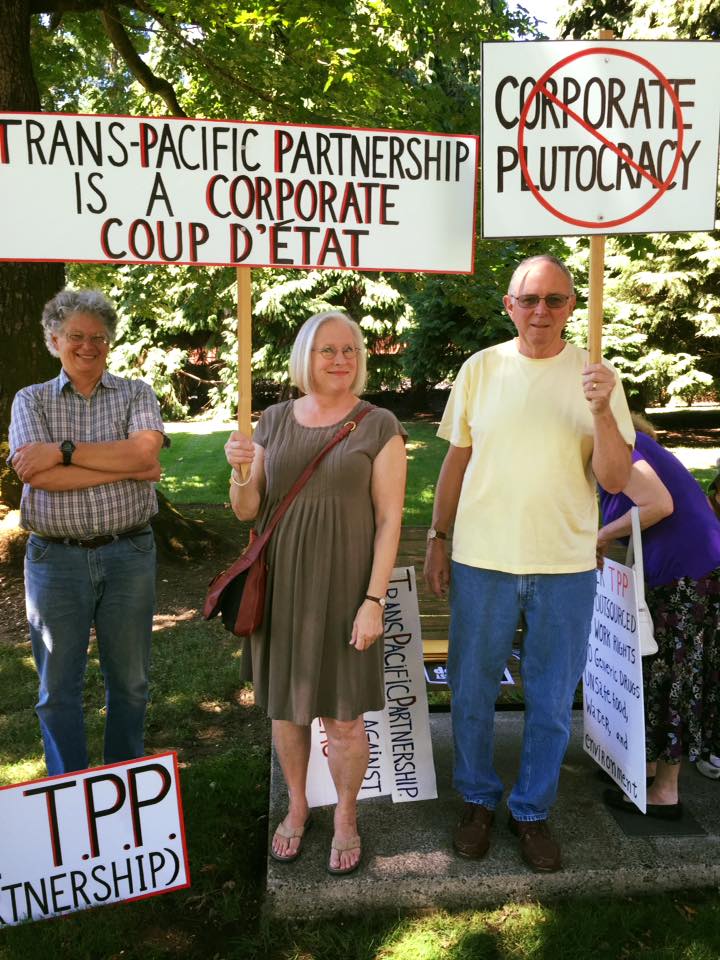 There is nothing simple about the Trans-Pacific Partnership, a global trade deal causing a political stir from the top of the ballot to the bottom. Yet local opponents recently had a simple message for Southwest Washington’s Congressional delegation: Don’t do it.

A group of 25 people affiliated with the Washington Fair Trade Coalition last week showed up with signs and a petition for Washington’s Democratic senators, Patty Murray and Maria Cantwell, as well as Republican Rep. Jaime Herrera-Beutler.

“People were able to express themselves well and made some good points (in opposition to the TPP),” said David Goldberg, one of the opponents who attended the rally. “Our position is it’s the other stuff that’s in there, not tariffs, that’s really driving this.” One of the group’s biggest concerns is that the deal could cede sovereignty to corporations by weakening the legal defenses of environmental regulations.

State Rep. Jim Moeller, a Vancouver Democrat challenging Herrera-Beutler for her seat representing the 3rd District in the U.S. House, lent his support to last week’s protest. “What was once the gold standard is now just ‪#‎foolsgold‬! Vote against the ‪#‎TPP‬!” Moeller wrote on his Facebook page.

Herrera Beutler voted with 189 other House Republicans and 28 Democrats in 2015 to fast-track TPP through negotiations. Sens. Cantwell and Murray were among just 13 Democrats in the Senate to support the fast-track legislation.

A spokeswoman for Herrera Beutler said that vote just allowed Congress to get say over the deal.

“Without that vote, democratically elected members of Congress would not be given a final ‘yay’ or ‘nay’ vote on the agreement,” wrote Amy Pennington in an email. “Once Congress receives the final agreement, Jaime will thoroughly study the details to determine its potential benefits and impacts on our region. Her first priority is to serve the best interests of Southwest Washington, and she will only support trade agreements that benefit our region’s economy and the folks who live here.”

During a speech in Vancouver on Tuesday, Murray said the TPP had become a “political football” but added she is “waiting to see what the final form is.”

In a state so heavily dependent on trade — more so than any other state — there are going to be local impacts whether the trade deal passes or not. What those are remain to be seen, though among those thousands of pages of international deals, there’s definitely more to it than just tariffs.