The chorus of the banned 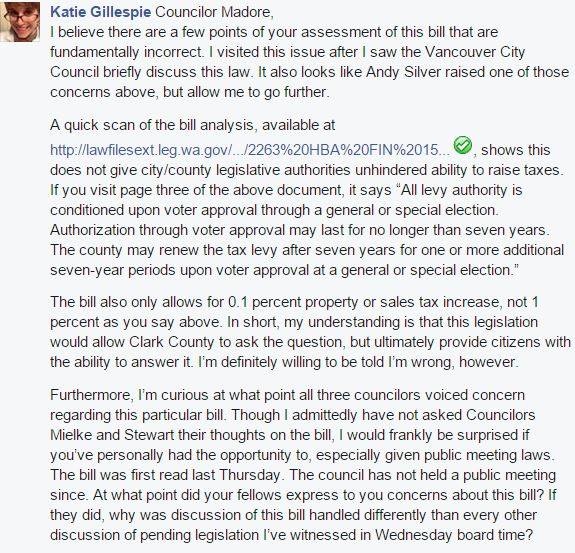 You have to give him credit, Madore’s clip art instincts are very good. Screenshot courtesy of Jennifer Barnes. Why do I do anything in this county without keeping screenshots of it?

My move to Clark County is complete. I’ve officially been banned from Councilor David Madore’s Facebook.

I’m not the first Columbian reporter whose ability to ask questions has been shut down by the councilor, and many loyal readers of APIL have also been prevented from criticizing or questioning him.

I’ve posted to Madore’s Facebook before without being blocked, so it’s worth explaining what I can only assume was the last straw: I called him out on a factually inaccurate description of a bill moving through the state legislature.

The bill, if passed, will allow local governments to increase sales or property taxes by 0.1 percent in order to fund cultural access programs. However, those taxes must be voted on by a majority of citizens.

The other component of the bill allows counties to levy a 0.1 percent sales tax, without a vote of the people, in order to create housing programs with at-risk, low income communities—seniors, homeless families with children, veterans and the disabled, for example. The latter will change RCW 82.14, which gives councils the authority to impose taxes for very specific reasons.

The latter point there really troubled me. The council typically votes during Wednesday board time whether or not to support legislation and send a letter to legislators explaining their position. The bill got a first reading last Thursday. The council didn’t hold any kind of public meeting between the reading and Madore’s post. So when did he figure out how his fellow councilors felt about the legislation, and why should their approach to this bill be any different?

Apparently Councilor Jeanne Stewart passed the message about the bill along. I asked her what the deal was, and she told me the Washington State Association of Counties, on which she is a board member, discussed the issue Friday morning. Stewart, fearing the potential tax implications, as well as the way the two issues are tied together, is opposed to the legislation.

Following that meeting, she apparently called Councilors Tom Mielke and Madore, left voicemails, and alerted them of the position she’d taken. She said at no point did the councilors discuss the legislation before or after that conversation.

Long story short, I asked Madore these questions, and discovered this morning that the comment has been deleted and I’ve been banned from commenting on the page.