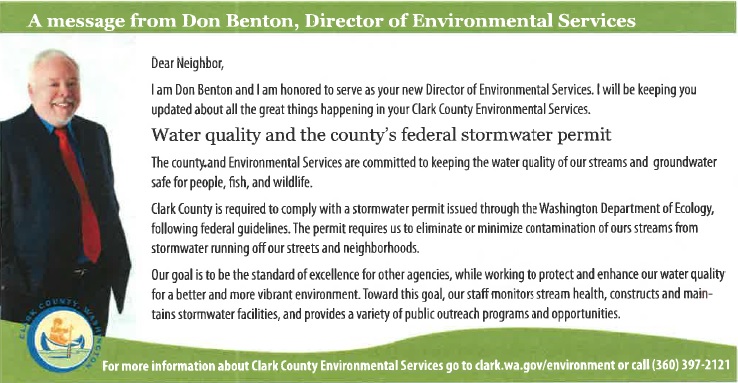 Those little slips of paper you toss (into your recycling bin) when you open your garbage and recycling bill? You’ll never look at them the same way again, once you read how much thought goes into them. The drama!

Which makes sense, as he’s the director of Clark County Environmental Services. The city of Vancouver doesn’t have such a department, and the responsibilities are handled by the city’s public works department. As such, environmentally friendly reminders about recycling, etc., come from Public Works Director Brian Carlson. But Carlson doesn’t put his name on the inserts, much less his face.

Before I share their exchanges, here’s two Benton inserts (front and back) followed by two city inserts. Last year, this was the proposed “recycling refresher” message that Benton suggested be included in all city and county bills. It was signed by Benton.

In a Sept. 23, 2013, email, Carlson wrote to Benton that he didn’t have a problem with the message, but he thought it should be either unsigned or signed “Your city, county and Waste Connections solid waste team.”

Benton responded that since the county is the lead agency on the countywide regional solid waste program, he should have his name on the message.

Then this email was sent to Waste Connections from a county employee: Carlson said the city would do its own message, which resulted in this email from Benton:

Undeterred, Benton asked Carlson again this year to include a message from him in city bills.

Here’s Carlson’s response, which was so long I couldn’t fit it on one page.