Picking sides in the restroom debate 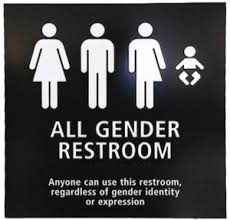 Vancouver City Councilors on Monday were ready to go to bat with state Legislators over two House bills and a Senate bill that would roll back a new rule that took effect Dec. 26 allowing transgender people to use public bathrooms and locker rooms for the gender they identify with.

Monday, Councilor Ty Stober said he’d made himself available to the Pride Foundation to testify against the bills this week, if they wanted him to. He also asked the council to consider formally opposing the bills as part of this year’s legislative agenda. (The two House bills didn’t move forward Wednesday, but Senate Bill 6443 did. It’s sponsored by Sen. Doug Ericksen, R-Ferndale.)

Stober pointed out that a city charter amendment on November’s ballot that expanded the human rights clause to include gender expression passed by the largest margin of any of the five charter amendments voters considered, garnering more than 80 percent support.

“I would be in full support of Councilmember Stober testifying on behalf of our full council,” Topper said. “I believe that equal opportunity and rights for all should be a strong stance that our city takes.”

Mayor Tim Leavitt objected to the lack of advance notice from state Rep. Liz Pike (R-Camas) and Sen. Don Benton (R-Vancouver) about the bills because it meant the city council didn’t have time to respond to it as a body.

“We believe that accessibility and openness in our community is a value that we have – and acceptance,” Leavitt said, echoing City Manager Eric Holmes’ previous statements on the issue.

Holmes mentioned that when the Marshall Community Center’s mechanical pool upgrades are performed, the city hopes to make changes to the locker rooms “to make sure all members of the public feel comfortable.”

Councilor Bill Turlay was absent Monday, so we don’t know what his response would have been. However, his wife, Stephanie Turlay, made her feelings clear in an email to the council and city manager Wednesday.

“I was most disturbed by Councilmember Stober’s remarks,” Stephanie Turlay wrote. “Making this issue a focus point for the council is out of line. … Political correctness is out of line, and this is an issue that affects women and young girls in an extremely detrimental way.  I am asking that if Councilmember Stober wishes to deal with these issues, that he do it outside of city business and not involve the restroom issue as part of the city’s agenda.”

Turlay said the current law will increase incidents of men preying on girls and women in bathrooms. Transgendered people should use the “family” changing facilities that some gyms have, she said.

“I see no reason to spend the taxpayer funds on these types of ‘special accommodations’ no matter what gender you believe you are. If you have a penis, you go to the men’s restroom – if you have a vagina, you go to the womens’ – that should be the end of it,” Turlay wrote.

Thursday, Leavitt told The Columbian that any issue the Legislature takes up that could have an impact on Vancouver “is in the purview of the city council to discuss, debate and potentially take formal action on.”

He continued, “Stephanie Turlay may not believe it is, but I think that’s primarily based on her disagreement based on the position that the city and the city council has. Frankly, I suspect that if we took a position that she agreed with, we wouldn’t hear from her about whether or not we should be addressing issues that are being discussed at the Legislature.”

John Matson, who frequently comments at county council meetings, recounted driving by a billboard in Chehalis — which sounds suspiciously like the Uncle Sam billboard — that talked about the governor passing a law that “men can go in women’s restrooms.”

“I tell you, talk about a disgrace,” a fired-up Matson said. “When we look and we hear about the problems of the child molestation and the rapes and the things that go on in this country and then we’re just promoting it.”

“I know a little bit about what lust is, and I’ll tell you, when a man loses his fear of God, he’s worse than a beast,” he continued.

Chuck Miller, another local conservative, also spoke on the issue.

Bridget McLeman, however, offered a foil to the transphobic comments, saying she wanted to offer the other side of the story to anyone who may have been listening.

“I’ve worked with transgender kids, and believe me, there is nothing worse than being transgender in a straight world, and having to go to school, and having to cover up, having to hide, having their own internal questioning at the same time as society is condemning them,” McLeman said.

Unlike the Vancouver City Council, the Clark County council offered no commentary or direction on the law.