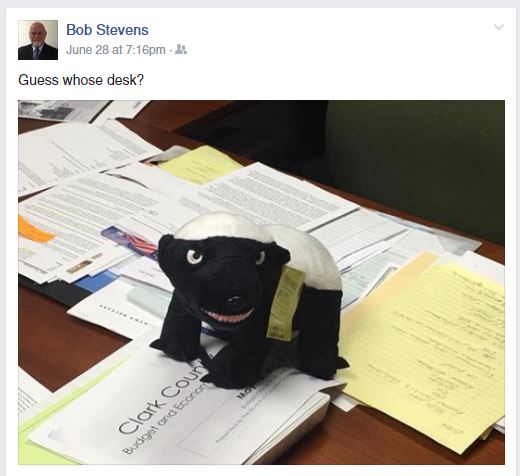 So here’s the problem with journalism in 2016.

I spend most of my week poring over public documents, reading councilors’ emails, trying to make sense of horrible government jargon, then writing it up so that it first of all, makes sense to you, and second of all, makes you care.

But no! Forget all that nonsense!

It was a silly little blog post I wrote in about five minutes last month calling Councilor Julie Olson a honey badger that apparently has the most staying power.

Olson gave me a very straight-laced answer when I got her on the phone. She later followed up giving an “official comment” on Mielke’s petition, which looked a lot like what she told me on Tuesday.

But she included a honey badger meme, because OF COURSE SHE DID. BUT IT DOESN’T STOP THERE.

Deputy County Manager Bob Stevens, who has been all over the internet lately criticizing Mielke and Councilor David Madore, actually BOUGHT OLSON A HONEY BADGER AND POSTED A PHOTO ON FACEBOOK. This is real. This happened. This is the government we have.