Madore makes tragedy about himself 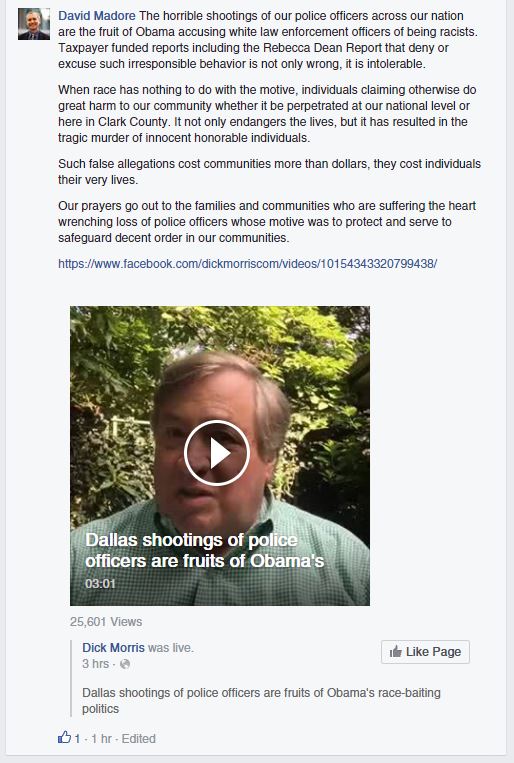 In the wake of the racial violence that wracked our country this week, a local politician responded by making it about himself.

Republican Councilor David Madore had a hard week this week. The results of Rebecca Dean’s extensive investigation into his allegations against county staff were released, and they were damning. “In all material respects,” Dean wrote, Madore was incorrect in asserting that county staff lied about the Comprehensive Growth Management Act in order to promote an “anti-rural growth agenda.”

The report also raised questions about the racist meme Madore posted in March in response to Community Planning Director Oliver Orjiako’s accusations of racism. The meme depicted a king of clubs with President Barack Obama’s face superimposed on it.

“When truth and logic fail, play the race card,” the meme read.

The report shows Madore told Dean he didn’t know at first that Obama’s face was on the meme. Then, he decided it was OK, because “Obama has ‘done more to cause racial divide in this country than anyone else.’”

I can’t say I was surprised, therefore, to read what wisdom Madore had to share on his Facebook page Friday.

“The horrible shootings of our police officers across our nation are the fruit of Obama accusing white law enforcement officers of being racists,” Madore wrote. “Taxpayer funded reports including the Rebecca Dean Report that deny or excuse such irresponsible behavior is not only wrong, it is intolerable.”

“When race has nothing to do with the motive, individuals claiming otherwise do great harm to our community whether it be perpetrated at our national level or here in Clark County,” he went on. “It not only endangers the lives, but it has resulted in the tragic murder of innocent honorable individuals.”

Can someone please remind Madore, at a time when families must move forward from the senseless deaths of their loved ones, that he doesn’t have to try to bring everything back to himself?

I reached out to the other candidates running for Madore’s seat. Republican John Blom said Madore’s words were “in extremely poor taste.”

As a county councilor, you are given a platform to speak to the community,” he said. “You can choose to use that for a positive or negative message, and its’ disappointing to see Councilor Madore use it in such an insensitive manner.”

Democrat Tanisha Harris, meanwhile, is in a unique position. If elected, she’d be the first black person to serve as a county councilor. Her brother is also an officer in the Portland Police Department.

She took Madore’s words in stride.

“I hope that all people can take a moment to reflect on what is important, what we share in common and how we come together to bring harmony and peace for everybody,” she said.