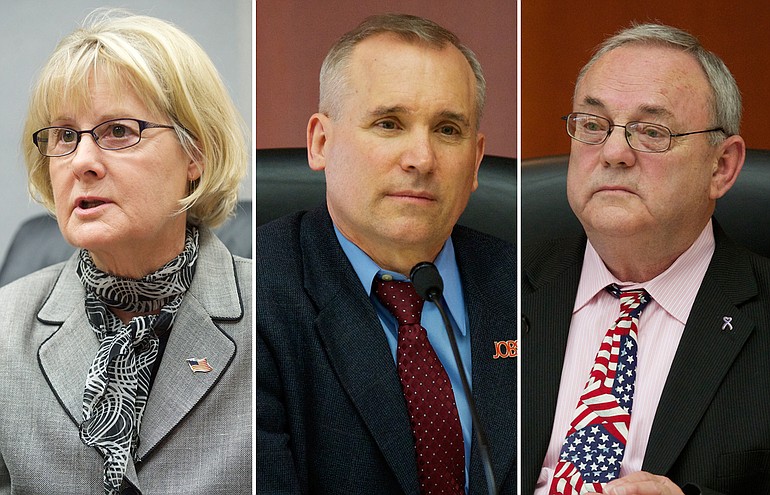 Next week’s Clark County council, Board of Health and board time meetings have all been cancelled due to lack of a quorum. Both Councilors David Madore and Tom Mielke are taking the week off.

That, in and of itself, is not an issue, of course. Everyone, including elected officials, should take a vacation once in a while. But what is problematic is why both are taking a vacation at the same time.

At the end of this week’s perplexing board time meeting, Madore asked county legal staff if he could appear by phone if necessary. Again, a reasonable request. Then Mielke chimed in.

“I was thinking that would be a good time for me to take a week off, too,” Mielke said. “That’s what I’m thinking.”

So, wait a minute. Even though the county council is perfectly within its legal right to hold a meeting with two councilors, and has in Councilor Jeanne Stewart and Mielke’s absence, once Madore leaves, council business stops a week?

To be fair, Mielke did ask whether there was anything urgent on the consent agenda, which, according to Acting County Manager Mark McCauley is “a bit thin. Nothing that can’t wait.” I like to think had something urgent been on the agenda it wouldn’t have been an issue.

“That would solve the problem with you not being here and just Jeanne and I being here,” Mielke continued. “She prefers that we all be here. Work as a team”

The kicker of this whole thing is this discussion happened in Stewart’s absence. Stewart took Wednesday off because it was the one-year anniversary of the death of her husband, David Stewart. The two were married for 40 years.

She asked her fellow councilors that, as a professional courtesy, they hold off on discussion of Madore’s proposed charter amendment until her return.

But in her absence, the other two councilors not only had an unscheduled executive session they failed to properly and legally announce, but they ignored her request.

“Jeanne has asked that we pull 1.2 (discussion of Madore’s proposed charter amendment) I have an issue any of us pulling something from a calendar unless it’s an emergency time off,” Mielke said. “It’s my understanding that this is not an emergency time off and to pull something from our calendar and delay it and delay it and delay, it is a bad, bad practice.  I understand that Jeanne wanted us to pull 1.2 and I just now heard that.”

“I think the reason, this is the one year anniversary of her husband’s passing,” McCauley responded. “I think she intended to be here today, but I think as the day wore on she thought better of it, because, y’know, it’s a hard day for her.”

“It really has to do with—I understand and respect that,” Madore said. “Certainly none of us begrudge Jeanne. We share her grief with her. What I would like to do is just simply introduce what this is. You’ve got a copy of both the resolution and the ordinance, Tom?”

The council then proceeded to schedule for its Sept. 1 consent agenda a resolution that, if passed, will schedule a public hearing for an ordinance that, if approved, will send Madore’s amendment to next November’s ballot. I know that’s a mouthful, but bear with me.

To Mielke’s credit, he later asked that, with respect to Stewart, the council hold off on discussing his item on the board time agenda.

I’m confused—and by that I mean someone needs to scoop my jaw off the floor—as to why teamwork is important enough to cancel an entire week of meetings when Madore is absent. But when Stewart takes the day off to mourn the passing of her husband, county business can continue.

Stewart’s request was certainly not legally binding, but it was reasonable. The council could have done a lot of good and built a lot of professional trust by waiting two weeks for this non-urgent item.

See my coverage of Wednesday’s meeting here. The full audio from the meeting can be found here.