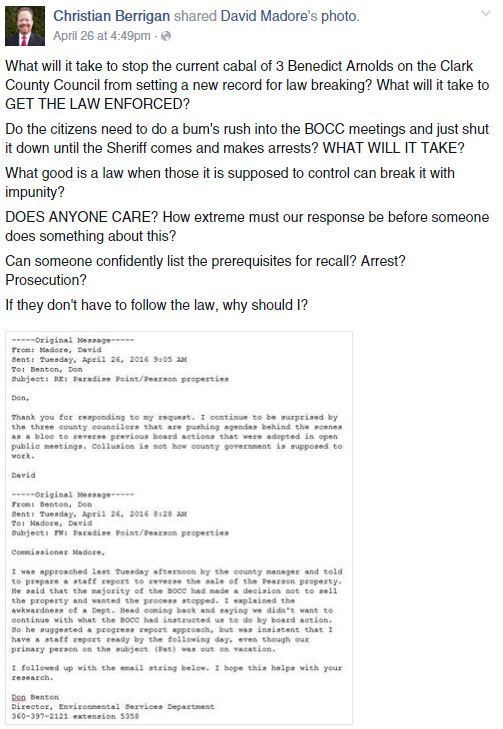 There was much chatter this week over a Facebook post by Christian Berrigan, state committeeman for the Clark County Republican Party.

In the post on his private, though publicly accessible, Facebook page, the outspoken conservative shared a post by Republican Councilor David Madore accusing Chair Marc Boldt, no party preference, and Republicans Jeanne Stewart and Julie Olson of colluding behind the scenes to overturn last year’s decision to surplus 20 acres of land at Pearson Point. I addressed this issue in my coverage of last week’s council meeting.

“What will it take to stop the current cabal of 3 Benedict Arnolds on the Clark County Council from setting a new record for law breaking?” Berrigan posted, supplementing Madore’s accusations. “What will it take to GET THE LAW ENFORCED? Do the citizens need to do a bum’s rush into the BOCC meetings and just shut it down until the Sheriff comes and makes arrests? WHAT WILL IT TAKE?”

The comments drew concern from several members of the public, as well as from at least one Clark County councilor. Olson emailed Acting County Manager Mark McCauley, Prosecutor Tony Golik, a Democrat, and Sheriff Chuck Atkins, a Republican, as well as Stewart and Boldt sharing her concerns.

“I am becoming increasingly concerned about the escalating rhetoric from Councilor Madore and his followers, including the close personal association of(council research assistant) Peter Silliman and (Environmental Services Director) Don Benton with Christian Berrigan,” Olson wrote. “I consider this a real threat made very publically and believe it is based on Councilor Madore’s continued unfounded public accusations against the county council and county staff.

The county, however, didn’t see it that way. McCauley said while Berrigan’s language is “obnoxious,” it doesn’t rise to the level of a crime. Unless a councilor requests the presence of sheriff’s deputies at next Tuesday’s hearing, he doesn’t plan to request any security as he has for hot-button issues in the past.

“It is an indicator that emotions are continuing to get inflamed by the rhetoric of certain people,” McCauley said. “Our hope is that it just doesn’t get any worse or spiral out of control.”

Berrigan, for what it’s worth, stood by his post when I contacted him about it on Friday.

“I am not doing any organizing of any protest or any giant number of people showing up and doing anything at this time,” Berrigan said. “That post was a rhetorical question to illustrate a point. However, also letting (the councilors) know as a matter of common sense that if they keep behaving like this, at some point it will continue to escalate.”