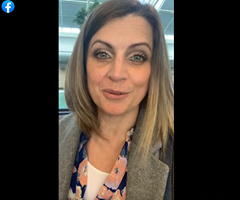 On Wednesday, congressional candidate Heidi St. John posted a video to her Facebook page captioned “The WOKE crisis…” in which she asked her followers if they’d watched the Grammy Awards the previous Sunday.

St. John, a conservative Republican and Christian activist, was not a fan, particularly of Cardi B and Megan Thee Stallion’s live performance of their risqué hit “WAP.”

“Normal people don’t watch that garbage. Of course you didn’t. You can’t go to your library any more to get Dr. Seuss because that’s damaging to children, but Cardi B can get up there and simulate lesbian sex in front of the entire country, because why? Because the elites are in charge of our country right now, and this is the kind of garbage we can expect, right? So they’re gonna get rid of Aunt Jemima, we’re gonna lose Land o’ Lakes butter, we’re gonna lose Dr. Seuss, but it’s ok to see grown women simulating lesbian sex for primetime TV,” St. John said. “You guys, Pepé Le Pew! Hello! At least we knew who the good guys were and the bad guys were.”

“For all of the havoc and wickedness that Hitler unleashed on the earth,” St. John added later in the video, “he got one thing right: Hitler said that he alone who owns the youth owns the future, and that’s we’re talking about.”

There’s a lot to unpack there. Pancake syrup, butter mascots, lesbians, libidinous cartoon skunks and fascist dictators aside, I did want to explore a point St. John raised: Have Dr. Seuss books been pulled from libraries in Washington’s 3rd Congressional District?

A scan of the Fort Vancouver Regional Libraries’ catalogue would indicate that is not the case. The classic children’s author behind bedtime favorites like “Green Eggs and Ham” and “Oh, the Places You’ll Go!” remains on the shelves at the local library. Searching his name the FVRL online database turns up 21 pages of results. If your Horton is hankering for a Who, or if your Cat is craving a Hat, you’ll find both at libraries in southwest Washington.

As for the claim that the elites have silenced the good doctor: Earlier this month, the company run by Dr. Seuss’ own estate announced that it would no longer publish a few of his books that feature racist illustrations. The decision affected six books out of his 60-plus collection of titles: “And to Think That I Saw It on Mulberry Street,” “If I Ran the Zoo,” “McElligot’s Pool,” “On Beyond Zebra!,” “Scrambled Eggs Super!,” and “The Cat’s Quizzer.”