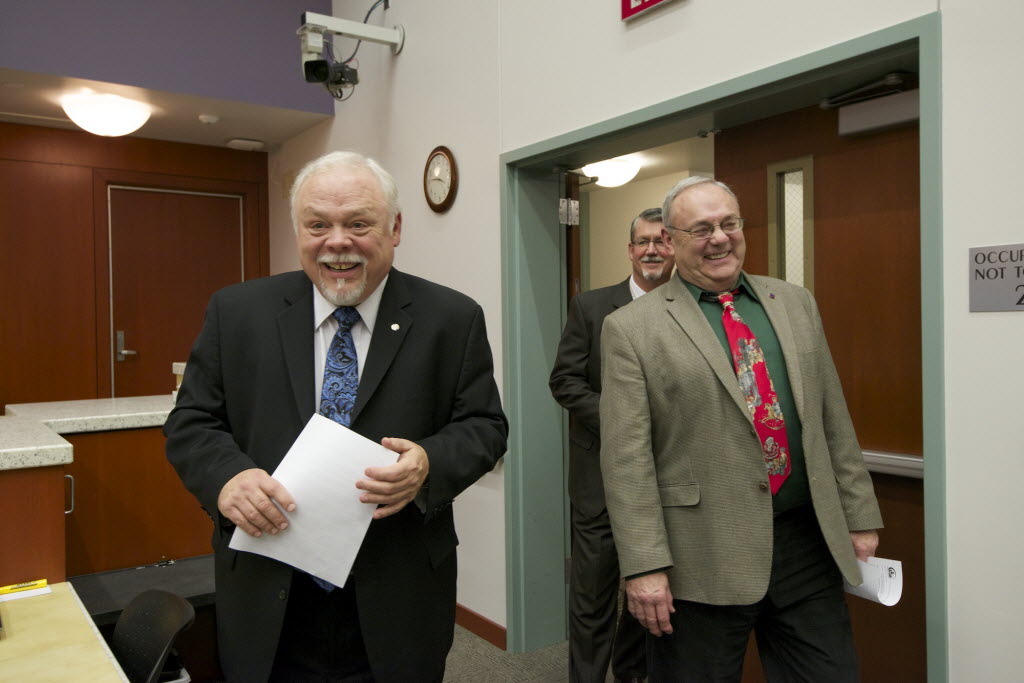 Well, that was weird.

On Wednesday I heard from a plaintiff’s attorney, who told me Clark County commissioners were expected to discuss the stormwater settlement during a 1:30 p.m. executive session prior to 2:30 p.m. board time. They’d then announce the settlement at the start of board time. I told Erik I’d go to the start of board time, then he could come over and listen to the rest of the meeting. He had his own story about Clark County litigation to write.

But at 1:20 p.m., Erik received a press release from Chris Clifford. It said there was going to be a press conference about the settlement after board time. Which was strange, because when people hear the term “press conference,” they think of this: And I knew I’d be the only reporter at this press conference. It takes a felony or something random like a Trojan unicorn to get Portland TV reporters north of the Columbia River. The Oregonian’s Clark County news consists mostly of feature stories written by freelancers who used to work at The Columbian.

Also, Clifford’s news release clearly had not gone through the proper channels. Official county press releases come from the Public Information and Outreach Office and have, you know, periods at the end of all of the sentences. And correctly identify Franklin as a street, not an avenue. News releases about litigation are reviewed by a county attorney, who would have pointed out that while the plaintiffs’ attorneys were from Earthjustice, the plaintiffs were the Rosemere Neighborhood Association, Columbia Riverkeeper and the Northwest Environmental Defense Center. Here’s Clifford’s news release: You know what else was weird? Commissioner Steve Stuart wasn’t mentioned in Clifford’s news release. As chairman, he speaks on behalf of the board. At the very least, he’s notified of press conferences. (He wasn’t.)

Erik went to board time and texted me that the settlement was announced. Benton and the commissioners put on a show for Erik’s benefit, talking about how the settlement was so great. Benton also had an updated press release from his office, but Mary Keltz, the county’s spokeswoman, ripped it in half.

Meanwhile, photo editor Troy Wayrynen and I walked up to the Public Service Center for the 3:30 p.m. press conference. Of course commissioners weren’t finished with board time, so we waited.

We went into the commissioners’ hearing room, and I asked Benton a few questions. I didn’t have too many, as I’ve been covering the litigation and knew the history.

Commissioner David Madore came in and stood against the wall with Mielke, Stuart and Clark County Administrator Mark McCauley for a minute or two, then said something about there were enough officials in the room and he left. So much for the presentation promised in Clifford’s press release. Mielke didn’t do his presentation, either.

They must have been disappointed to announce a press conference and have only me show up.

So now some of our commenters are wondering why we ran a photo of Benton with Madore in the background, accusing us of unfairly linking them to the case when they weren’t around when the decisions that led to the lawsuit were made.

We ran a photo of them because they called a press conference. They saw this settlement as a huge win for the county, considering plaintiffs could have asked for a much larger penalty.

Here’s two other photos from the “press conference.” Photo bomb by Big Stu! The one below is my favorite – doesn’t Benton look like a kid on Christmas, so giddy? And Mielke’s jolliness matches his tie. I’ll end by saying that while Troy and I found the whole situation weird, Erik called it “quite normal.”