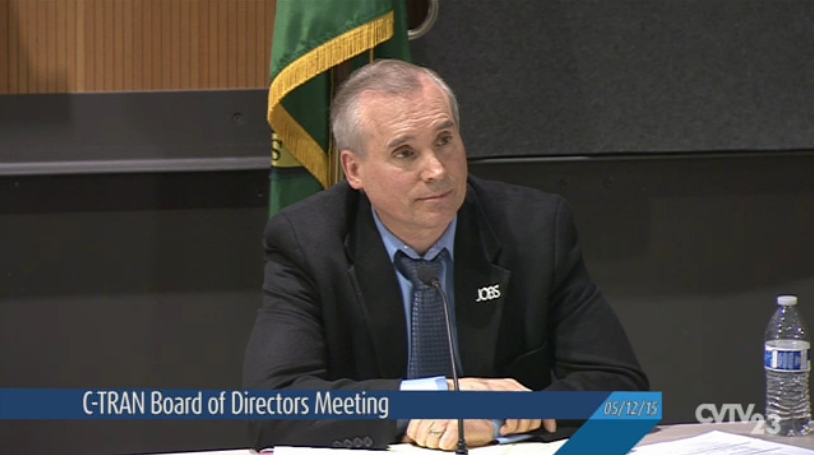 The end of this week’s C-Tran board meeting may have been summed up best by Camas City Councilor Greg Anderson.

“This is awkward,” Anderson said at one point.

The group had reached an uncomfortable stalemate as it prepared to go into a closed executive session to talk about a lawsuit that was recently filed against the transit agency. The hang-up: whether Clark County Councilor David Madore should recuse himself from that discussion. His colleague in a similar position, County Councilor Jeanne Stewart, had already agreed to do so.

Clark County, you’ll remember, threatened to sue C-Tran back in December over alleged open meeting violations. But it never made good on that threat. Instead, a group of citizens filed pretty much the same lawsuit last month.

Stewart voluntarily removed herself from the executive session to discuss the complaint. When Madore refused to follow suit, the rest of the C-Tran board took the unusual step of voting to exclude him.

But that likely won’t be the end of it.

Shortly after that vote, the board went into a closed session on another topic. But it never actually got to the lawsuit, so discussion of it was delayed until June. The board also later took a strange vote to “postpone” Madore’s exclusion until that time — which means we might do this all over again in about a month.

There are a lot of complicating factors here. Madore and Stewart both recused themselves from a C-Tran executive session in January, before the county backed off its legal threat. (Though county councilors technically never rescinded the vote authorizing it.)

As multiple board members implored Madore to again recuse himself this week, Vancouver City Councilor Jack Burkman wondered why the decision should be different.

“I don’t see any change in circumstance from when you recused last time,” Burkman told Madore at the meeting. “It’s the same motion. It’s the same issue, the same threat to this organization.”

Madore later pointed out that the lawsuit filed last month did not come from the county. It’s also worth noting that Madore and Stewart are both named as defendants in the complaint, as are all C-Tran board members. Which essentially means the board voted to shut Madore out of a discussion of C-Tran’s legal strategy against the suit, when Madore is one of the very people targeted by it.

Shortly before the vote, Burkman asked C-Tran legal counsel Tom Wolfendale what risks might be associated with excluding Madore from the executive session.

Wolfendale’s reply: “Ironic as it may sound, in order to give you an assessment of that, we would need to be in executive session.”