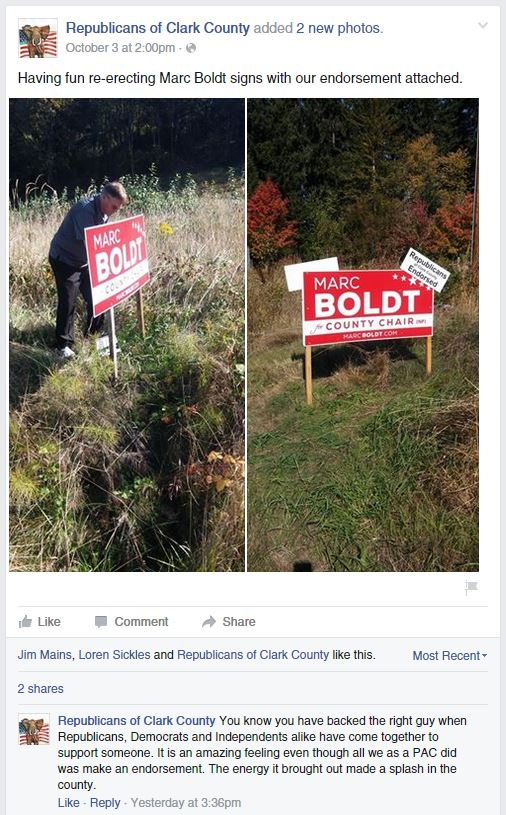 Oh, to be a fly on the wall at the Boldt-Hinton Thanksgiving dinners.

Local conservative blogger Kelly Hinton filed a complaint with the Public Disclosure Commission against Clark County council chair candidate Marc Boldt, no party preference, and Carolyn Crain, a local political activist behind the recently formed Republicans of Clark County. Note that this group isn’t the Clark County Republican Party, the official arm of the party locally, but a separate associated party registered with the PDC. That distinction is important, so remember it.

Hinton, remember, is Boldt’s brother-in-law and was his legislative assistant when Boldt was in the state house. And you thought debating politics with your family was awkward.

The “of Clark County” is pretty teeny, though, and chances are you wouldn’t see it if you were just driving past.

“Having fun re-erecting Marc Boldt signs with our endorsement attached,” the post reads.

Confused? Well, it’s no wonder, and that’s partly Hinton’s point. Signs in support of the write-in campaign for Rep. Liz Pike, R-Camas, also have small signs of their own affixed to them that say “Republican Party Endorsed.” That, of course, refers to the CCRP, whose precinct committee officers voted 47 to 12 to endorse Pike. The CCRP has about 180 total PCOs. The Republicans of Clark County, meanwhile, endorsed Boldt in September. At the time, Crain said the group had about 70 members.

“The lie of a ‘Republican endorsed’ sign notwithstanding, this is the absolute definition of a campaign coordinating with an independent expenditure PAC,” Hinton wrote on his blog, clarkcountypolitics.blogspot.com.

Hinton, who I’m pretty sure has been a local politico longer than I’ve been alive, is no stranger to dirty politics himself. Under the moniker “Kage McClued,” Hinton wrote letters and opinion pieces to The Columbian for more than three years that praised Republicans and lambasted Democrats. His time as a legislative aide for Boldt and Sen. Pam Roach, R-Sumner, was mired in controversy. And his blog doesn’t exactly make for pleasure reading.

But now that Hinton has officially filed a complaint, I’m curious to see how the PDC rules and will follow up when they’ve made their decision.

Crain, for one, denied the accusations when I shot her a Facebook message on Monday.

“The only thing I know was that an anonymous donor had the signs printed and several volunteers put them up for Marc,” she told me. “Has nothing to do with the PAC although we did endorse him. We didn’t coordinate that.”

“I just took a picture of Dennis (Henry) putting the signs up that were down and he and I did put up a few endorsed signs but that wasn’t a PAC coordinated process,” she said.

“It wasn’t voted on nor discussed in our meeting,” she continued. “Absolutely NO collaboration with MARC on our PAC part.”

I asked Boldt for comment and, for the very first time since I’ve known him, he declined.