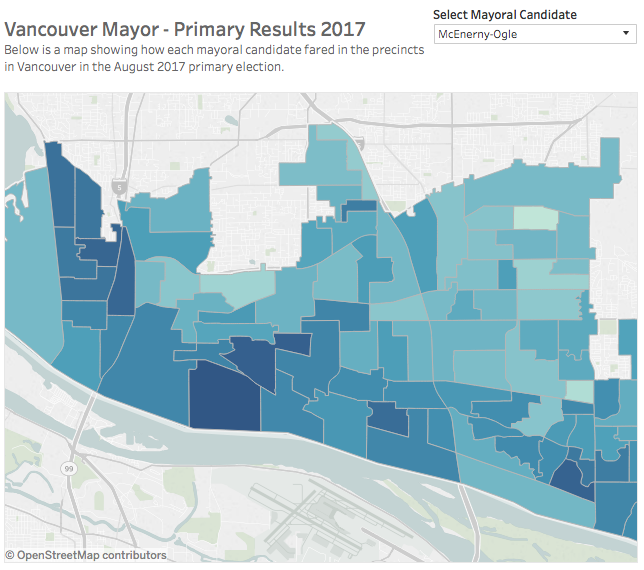 All of Vancouver’s precincts agree on who should be the next mayor.

The results as of Wednesday show McEnerny-Ogle and Campbell won all 93 precincts, and Glover lost only one precinct to opponent Michelle Beardshear.

And that was in precinct 661, where Beardshear lives.

Glover said she was surprised by the results, and relieved too.

Though winning precincts don’t count toward the final outcome like winning states do in the Electoral College for the presidential elections, the 93 precincts in Vancouver do serve as a political barometer of sorts for the different regions and neighborhoods throughout Vancouver.

Precinct wins are usually more spread out between candidates. Compared with the last general election for mayor of Vancouver, in 2013, Tim Leavitt won 59 out of 93 precincts. Opponent Bill Turlay won 33 and tied in one of them.

When Glover ran against city councilor Ty Stober for his spot in the 2015 primary election, the precincts were also not as agreeing. Even though she eventually lost in the general election, in the primary Glover won 22 precincts and tied two of them with Stober.

The candidates will run in the November general election, but outgoing city councilor Jack Burkman says he thinks the low voting turnout is an indicator of the lack of candidate competition.

McEnerny-Ogle will campaign against Steve Cox, Campbell against Maureen McGoldrick, and Glover against Michelle Beardshear. But the challengers to the majority vote-winners face a tough challenge of winning precincts if they hope to gain ground.

The numbers for this story are based on data released on Wednesday, Aug. 2.