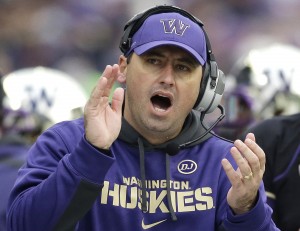 FILE – In this Nov. 29, 2013 file photo, Washington head coach Steve Sarkisian yells from the sidelines in the second half of an NCAA college football game against Washington State in Seattle. Sarkisian has accepted the Southern California coaching job, a person familiar with the decision told The Associated Press. The person spoke Monday Nov. 2, 2013 on condition of anonymity because no official announcement had been made by either school. (AP Photo/Elaine Thompson, File)