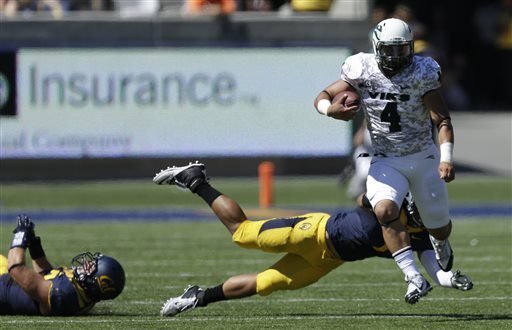 Before our weekly look at how Clark County players fared in the weekend’s college football games, important business must happen first:
Way to go Cougs!
Any team that beats USC (even a Lane Kiffin-coached Trojans team) gets kudos in my book. But Satruday’s 10-7 win in L.A. could be huge in WSU’s journey back to relevancy. Northwest college football is much more compelling when all four Pac-12 teams are competitive. As ugly as Saturday’s win was, it shows the Cougs now much be taken seriously.

Portland State nearly became the second Big Sky team to upset a Pac-12 foe in two weeks, hanging with Cal all game before falling 37-30 in Berkeley. Skyview grad Kieran McDonagh set tone with an 81-yard touchdown pass 45 seconds into the game. The sophomore finished 13 of 28 for 308 yards on TD and one interception. He also rushed 11 times for 69 yards and a touchdown.

Eastern Washington, the Big Sky team that captured the region’s attention with a 49-46 opening week win over OSU, kept on rolling Saturday. The Eagles jumped out to a 29-0 first-quarter lead, the cruised past Western Oregon 43-14. Heritage grad Ashton Clark had two catches for 36 yards. Local guys Ashton Miller, Steven Forgette and T.J. Boatright played on the line for an offense that amassed 597 yards.

I’ll update this later today with more players, but NFL games are about to start. Priorities, you know.

***OK …. Back from doing what every other sport in America should also do, succumb to the power of the NFL. Baseball really needs to end on Labor Day, and the NBA shouldn’t start until New Year’s.

— Garrett Grayson (Heritage) threw two touchdowns for his fourth career multi-touchdown game. It wasn’t enough for Colorado State, though, as Tulsa won 30-27. Grayson was 12 for 29 with two touchdowns and two interceptions.

“We’ve given both games away,” Grayson said. “I can’t really say anything different. Tonight, we took a seven point lead into the fourth quarter and then they made some plays and we didn’t. We struggled as an offense. We couldn’t run the ball. We were moving the ball pretty much at will in the first three quarters and then we kind of stopped. We don’t have an explanation for it.”

— Southern Oregon quarterback Austin Dodge (Skyview) completed 29 of 43 passes for 338 yards in a 38-34 loss at Montana Western. In that game, sophomore tailback Zach Marshall (Camas) had a team-best 71 rushing yards for the Raiders on 15 carries, including one that went for an 18-yard score in the second quarter.

Many small colleges around the Northwest has their season openers on Saturday. Check back tomorrow for a look at NCAA D-III and NAIA players from Clark County.