Another School Year in the Can

Once again, for the fourth year in a row, I missed the last days of school, which also happen to be my favorite, save field trips and the occasional lazy day. Meant for goodbyes, parties, movies, and filling yourself with good memories (as well as junk food), I cannot remember the last time I was able to enjoy these last few days in school with my friends. Tragic, isn’t it? Well, many may think that, but I have been spending my last few days of the school year doing something I find even more enjoyable than movies, and junk food (which is saying something, considering that I have just entered my teenage years); traveling around the country to visit a variety of National Parks.
Over the last four years, my family and I have had the chance to visit a few different parks: Redwood National Park, Glacier National Park, Yellowstone National Park, Grand Tetons National Park, Mt. Rainer National Park, San Juan Island National Park, and Grand Canyon National Park. My family has made a tradition of ditching the last unneeded days of school to visit these amazing displays of nature. In the past two weeks, beginning my 7th grade summer, my family and I added one more park onto that growing list; Yosemite National Park in California. Just when I thought I could be surprised no more, after visiting some of the most well-known parks in America, the beauty of Yosemite still managed to take my breath away. Its large valley hid many amazing secrets: majestic waterfalls, scenic cliffs and landforms, a range of free and graceful wildlife. Out of all the parks that I’ve visited, I think that this one inspired me the most, whether it is because I have reached an age at which I have finally began to recognize and enjoy the elegance of nature, or simply because this park was special to me, I don’t know. Even after exploring Yosemite for more than a week, I know that  didn’t have the chance to absorb all there was to see.

During the time I did spend in the park, and out of all the places I did manage to see, I was most touched by and most enjoyed a valley overlook point called Taft Point, which I visited on one of my last hikes. The trail lead along a 2-mile hike through forest, elevation rising, until the trail leveled out to a flat stretch of rock littered with deep crevices that didn’t end until the valley floor 4,000 feet below. At the end of this flat stretch of rock is a cliff. A big cliff. Over 4,000 feet strait down, with no guard rails. I think it was the fact that there were no guard rails that made me like that location so much, I think it made me feel closer to nature, freer. 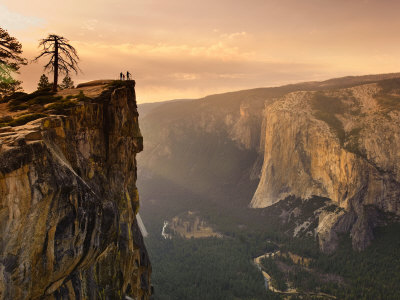 I would like to say that all of my weeks of this summer will be as interesting as my last, that this was just a warm up, but, unfortunately, this is not the case. The majority of my remaining summer will probably be spent at soccer tournaments, out with friends, and on the occasional camping trip, but only time will tell. All I can say to conclude my first amazing week out of school is: I enjoyed it while it lasted.