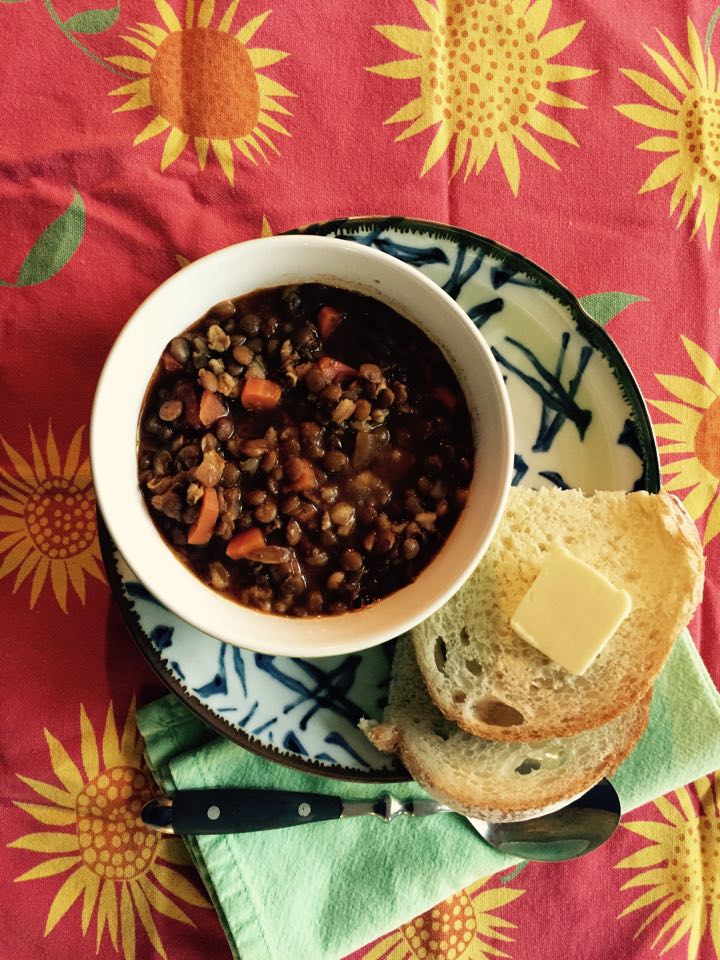 I was lurking around Facebook a couple of nights ago when I came across a lentil soup recipe from former colleague Beki Calvert Lincks. I met her in 1998 when I took a job across the Columbia River. She was the newsroom systems training manager, a title she and her boss apparently made up. Indeed, she was so thorough with her training that I wrote everything in a notebook that I kept until now. Why? I don’t know, but I can’t seem to throw it away.

But it was her sense of humor and grace that made me want to stay in touch, if only on Facebook.

Beki lives in Tennessee now. She entertains me almost daily with observations about people and politics — all good. She gives Facebook friends updates on the “grandbunnies,” her grandchildren, and she admits to thinking about Portland every day.

So here’s the soup recipe. I didn’t put it in typical Associated Press food style; I let Beki speak for herself. She apparently cooks the way she talks. (I love the details about how many turns of the pepper grinder and the shock at being out of tomatoes.) The soup looks great for cold, wet nights in the Northwest, and it gives me one more connection to a former colleague. Beki Calvert Lincks: Did those lentils come from the state of Washington, one of the largest producers of lentils in the world?

Most of you know I rarely use a recipe except as “general” reference. So here goes:

[I] slightly caramelized the onion and added the garlic just long enough to bloom. Added two cubes of Not Chicken bullion and a couple of cups of water.

While that simmers, dice three large carrots. Add to the pot.

Add about a quarter cup of barley and a tablespoon of salt.

And some black pepper — about 24 turns from the pepper mill.

Out of tomatoes (really???), so I used a small box of Pacifica roasted red pepper and tomato soup.

Also put in 6 or 7 sprinkles of red pepper flakes.

I let that simmer for about 30 minutes and then tasted it.

Added a heaping teaspoon (measured in my hand) of garam masala and a big pinch of ground cardamom. And another half of a medium-diced onion. Let the onion cook through and BAM! Tasty.
Enough for 4 or 5 hungry people.