Three Kings cake is a Spanish tradition for Epiphany 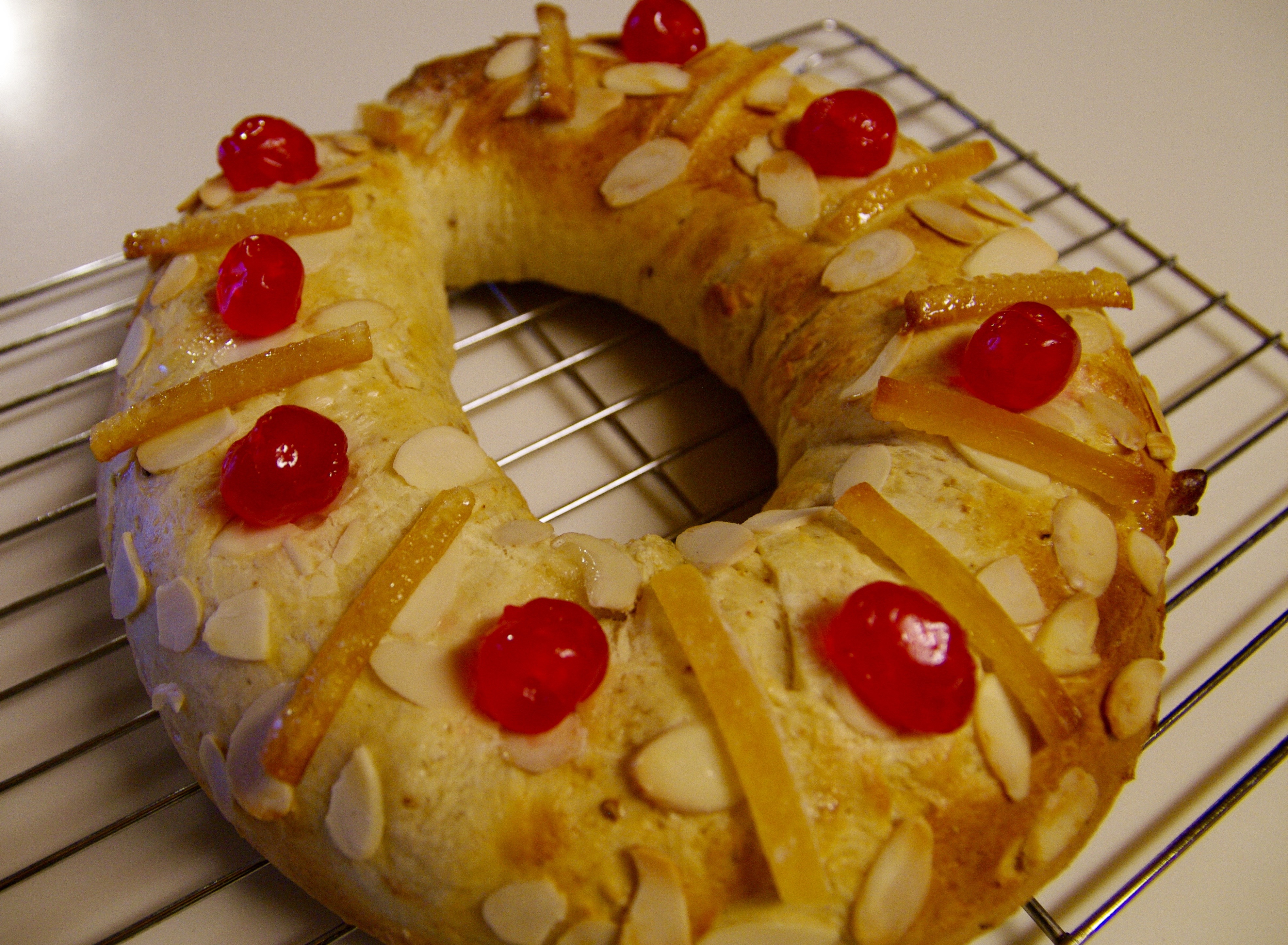 This is Roscón de Reys, the Spanish version of Three Kings cake.

Carlos Palacián grew up in Spain, where Christmas gifts appear on Jan. 6, the Solemnity of the Epiphany of Our Lord. Carlos remembers cleaning and polishing one shoe the night before and placing it in the living room so the Three Kings would have a spot to leave his gifts.

“In the morning, whatever was around your shoe was yours,” said Carlos, now 48 and a member of Christ the King Parish in Seattle. “Pretty much all of Spain celebrated the same.”

That meant his two sisters and parents also had carefully placed shoes so the Magi wouldn’t miss them. Villages and cities celebrated with parades; the Palacián family went to Mass; and, always a constant, the clan dined with their grandparents. Carlos doesn’t remember a specific holiday menu, but he says without fail the meal included Three Kings cake, or Roscón de Reys, with its trinket of the Christ child tucked inside.

Now I’ve always loved that the Magi returned by different routes so they could avoid King Herod and thwart the evil he was contemplating. When I think about the Internet and global positioning nowadays, I worry that Herod easily would have tracked the Wise Men and found the Baby Jesus.

But that didn’t happen, and in St. Matthew’s Gospel, we have the account of the manifestation (the meaning of the Greek word “epiphany”) of the Christ child to the Three Kings. It was a huge event for non-Jew converts that the King of the Jews would manifest himself as their savior as well.

With my newfound appreciation for this holy day, I am making the Three Kings cake that the Spanish-speaking world holds so dear. (Other European countries and Eastern rite churches have their version of the cake, too.) I found Roscón de Reys in older Spanish cookbooks. I’ve modified and combined the recipes somewhat, in one attempt using dried apricots and cherries instead of candied fruit — just a personal preference.

I hold hope that this feast will gain popularity in the United States as it has in one corner of our state. Lois and Del Brown of Raymond in Pacific County have a large, extended family. Christmas is taken up with Mass and family gatherings. Lois said they wanted some special time for friends after Christmas. Epiphany seemed perfect.

Lois and her husband, members of St. Lawrence Parish, found cards that had gold accents and drawings of the adoring Magi. She used them for invitations. She threw a potluck and invited Father Paul Kaech, her parish priest. She did not serve the cake, but she honored two guests who got the gold paper plates marked “king” or “queen” written on the bottom.

So let us join the Browns and Palaciáns — Carlos, Lisa, Paco and Mariano — in remembering the Three Kings who traveled so far under hardship to discover the Christ child.

Roscón de Reys
• 2 packages of active dry yeast
• ¼ cup sugar
• 6 tablespoons milk, warmed
• 2-1/2 cups flour
• ½ teaspoon salt
• 1 teaspoon finely grated orange zest
• 1 teaspoon finely grated lemon zest
• 4 tablespoons butter, softened
• 2 large eggs
• 2 teaspoons dark rum
• 2 teaspoons orange-flower water (optional)
• ¼ cup sliced almonds
• candied fruit, or dried apricots and cherries, for decoration
• 1 large almond, filbert or plastic trinket of the Baby Jesus (I didn’t add anything, bowing to fears that someone might choke)
Mix the yeast with 1 teaspoon sugar and the warmed milk. Stir in 3 tablespoon of flour to make a wet paste. Let stand in a warm place for about 20 minutes.
Sift the remaining flour with the salt into a large bowl and stir in the rest of the sugar and the orange and lemon zests. Cut in the butter until the mixture resembles fine bread crumbs.
Beat the eggs with the rum and orange-flower water. (I subbed in orange oil with a little water. You can get orange-flower water online or at Mediterranean specialty shops.) Make a well in the middle of the flour, and add the eggs and the yeast. Mix a sticky dough, but then push the mixture around with your hands for about 10 minutes to get the dough to lose its stickiness.
Put the dough on a lightly floured surface and continue to knead, probably for another 10 minutes. It needs to be smooth and elastic. Place the dough in an oiled bowl, cover with a towel and leave in a warm place for about an hour.
Punch the dough down. Slip in the trinket, if you so choose, then shape the dough into a ring, joining the ends, and place on an oiled cookie sheet. Cover again and let it rise for about 45 minutes.
Heat the oven to 350 degrees. Brush the top with lightly beaten egg white and sprinkle on the almonds and other decorations. Bake 20 minutes. Cool on a wire rack.