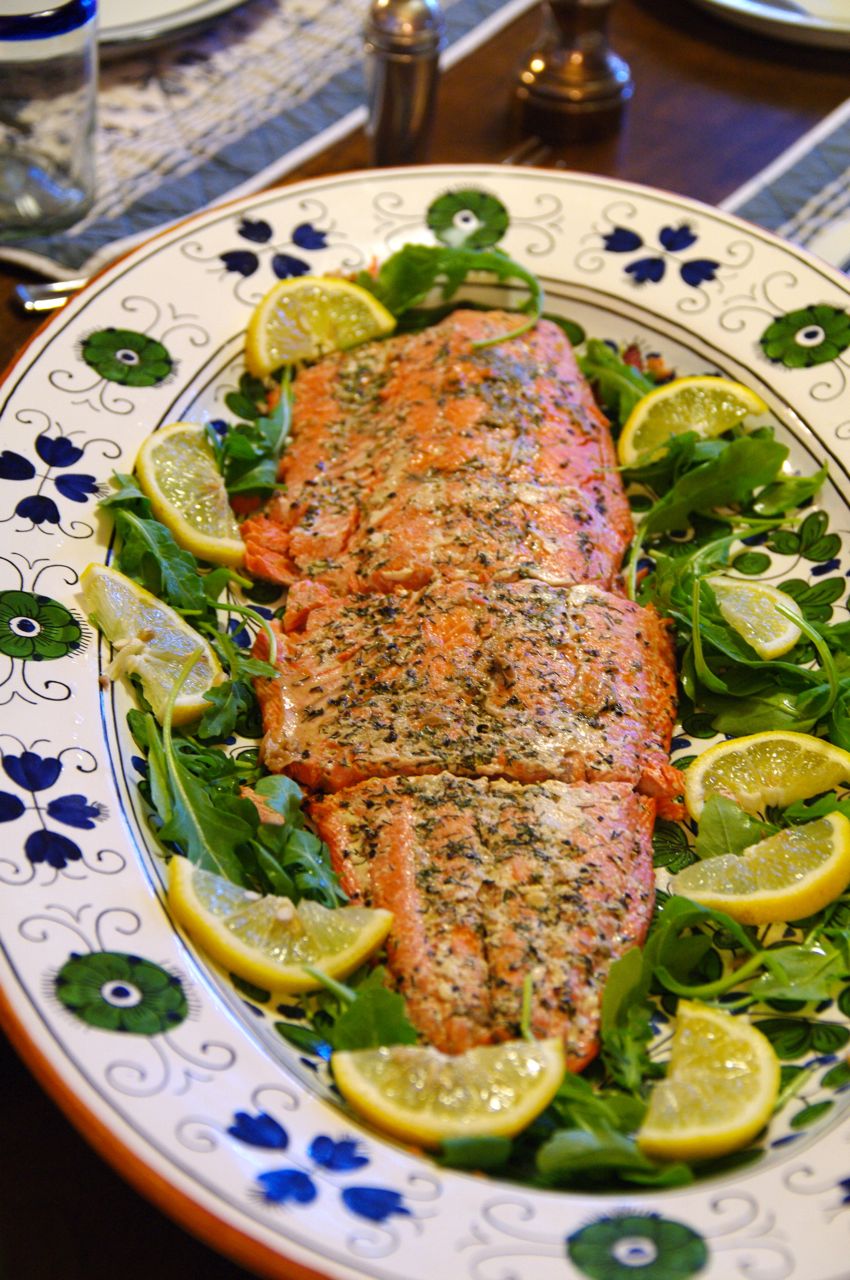 No. 1 and No. 3 sons show off their work. One of these fish was the centerpiece for a dinner when my brother-in-law and his wife were visiting from Pittsburgh, Pa

A couple of weeks ago (yes, I’ve been busy), I said I’d blog about the sockeye that two of my sons caught in Alaska. The dangling fish in the picture are from their second day of fishing in Yakutat. They caught hailbut the first day; sockeye the second.

So when my brother-in-law and his wife from Pittsburgh, Pa., were in town last week, we had a feast one night of salmon with hollandaise sauce, broiled asparagus, Swiss chard potatoes and Caprese insalata. We laughed, we drank wine, we ate. After dinner, we looked at old pictures from when our kids were young (and we were, too), and we laughed some more.

I have to confess, however, that I had a dry run for this dinner a week before when I was in Seattle cooking a meal with Chris Kirch, who is a chef at Maddox Grill in Lynnwood and also a parent at Christ the King Catholic School in north Seattle.

At the dinner with our company, the Intrepid One (henceforth the nickname for my husband in this blog) was in charge of grilling, and No. 2 son made the hollandaise. Here are the details:

Clean the grill and reduce it to low heat. Lay the fish skin-side down. Before long, the heat will release the fish from the skin, and it will be very easy to slide a spatula between the two when the time comes for flipping. The skin stays on the grill. If you cook a large fillet, be prepared to work in stages so you don’t get the tail overcooked and the meatier part undercooked.

After 2 minutes, cut 4-6 inches of the tail off and flip it over onto the skin, allowing it to cook another minute or two. Remove it from the grill. (Note in the picture how the divided fish is reassembled on the platter.) Sockeye salmon grilled and topped with fresh pepper, dill and lemon, just waiting for the hollandaise sauce. The platter is from the days when I was crazy about Italian pottery, about 20 years ago.

By this time, the main body of the fish has cooked about 4 minutes. Flip it over, allowing the thicker portion to cook another 3 to 4 minutes. Be prepared to take it off.  After removing the fish from the grill, scrape off the dark gray matter with a knife. Let the fish rest for 5 to 10 minutes because it will continue to cook. Always adjust the times according to how thick the fish is, and that may take some experimenting. If you have sawdust, you’ve cooked it too long. The trick is to make it as rare as possible without it being undercooked. Flip the fish right side up and (former) skin side down. Arrange the fish on a platter with some greenery and lemon for visual appeal. Add salt and pepper and maybe some dill.

1/2 pound unsalted butter, melted and warm, but not hot

Melt the butter and reserve. Combine the egg yolks and water in the top of a double boiler over hot, but not boiling water, and stir briskly with a wire whisk until the mixture is light and fluffy and the consistency of light mayonnaise.

Remove the top of the double boiler from the heat and slowly add the butter in a thin stream (No. 2 son gets the Intrepid One to do this), while continuing to whip the mixture.

Season the mixture with the lemon juice and salt to taste. (We add fresh dill, which is especially fragrant and tasty now.)

Lidia’s Swiss Chard Potatoes (I also served this at the Epic Teachers dinner that I prepared in June. I was able to make the dish the day before, haul it to the Emerald City in a cooler and then reheat for the dinner. I used rainbow chard for variety in color and because it blended nicely with the heirloom tomatoes in the Caprese.) Swiss chard potatoes from “Lidia’s Favorite Recipes,” by Lidia Matticchio Bastianich. The serving dish is from my Polish pottery phase.

To prepare the chard: Trim the ends from the stems. Cut off and discard any wilted or yellow parts of the leaves. Strip the stems from the leaves, and cut the stems into 1/2-inch lengths. Cut the leaves in half lengthwise, then crosswise into 1/2-inch strips. Wash the leaf and stem pieces thoroughly, then drain them well.

Bring the salted water to a boil in a large pot. Add the potatoes, and cook 20 minutes, until tender. Add the Swiss chard stems. After another 10 minutes, add the leaves, then cook all until the vegetables are very tender, an additional 5 minutes. Drain in a colander.

Heat 2 tablespoons of the olive oil in a large skillet over medium heat. Add the garlic, and cook just until it begins to brown, about 1 minute. Add the Swiss chard and potatoes, and season them lightly with salt and pepper. Cook, stirring and mashing the potatoes until the liquid is evaporated and the potatoes are coarsely mashed. If the potatoes begin to brown, adjust the level of het to medium-low and continue stirring. Add the remaining 2 tablespoons olive oil and season to taste with salt and pepper. Stir and serve hot.