Ah, summer! Basil in the mix 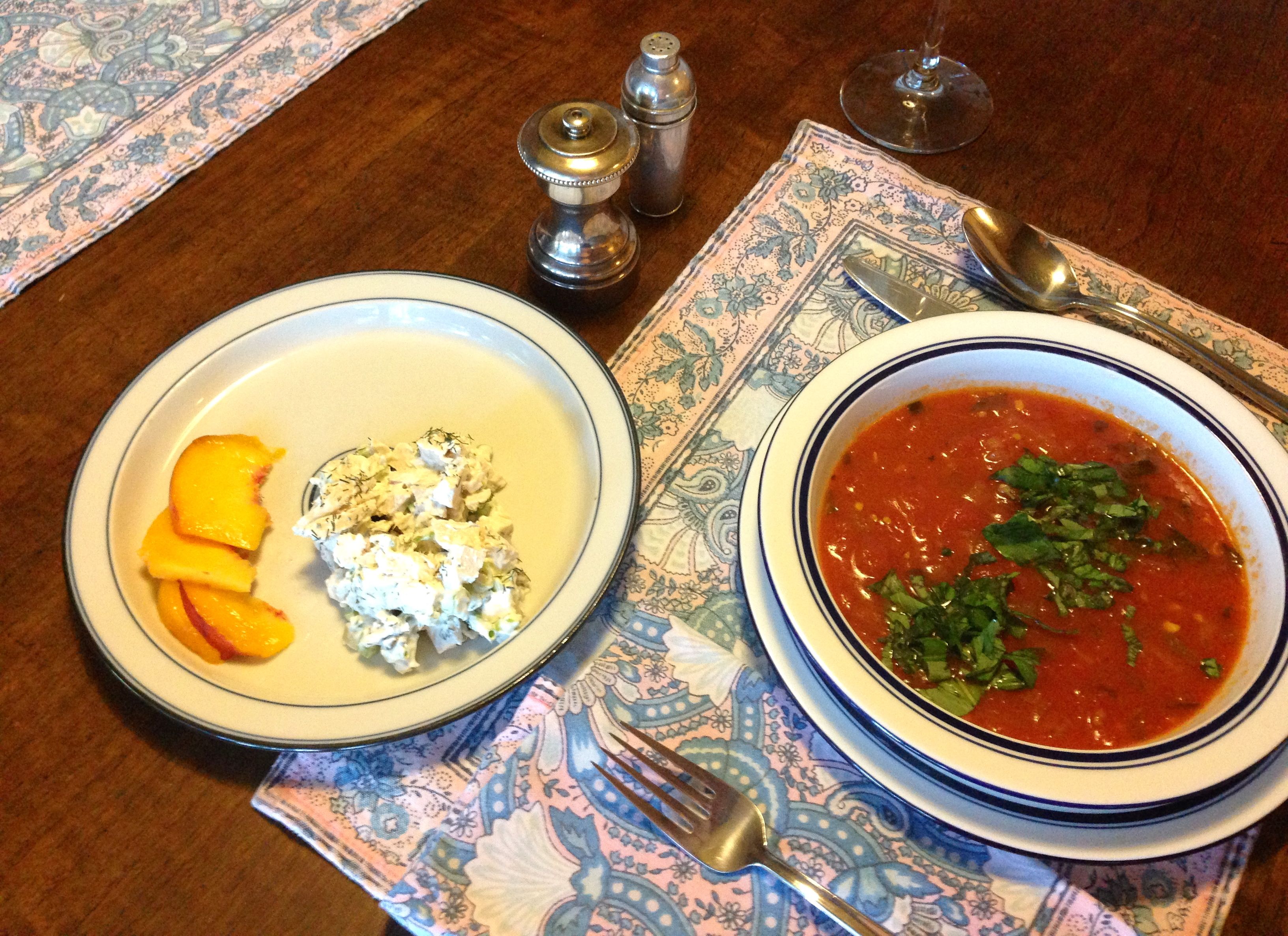 Tomato and basil soup is great for a summer meal. I’ve paired it with chicken salad and contrasted the saltiness of both with a freshly sliced peach.

One thing about hot weather: It gets me thinking about basil and the sweet  aromas of summer. It’s the season for linguine with tomatoes and basil, pesto, bruschetta, and tomato and basil soup. And don’t forget the Insalata Caprese.

Basil is Greek for “royal” or “kingly,” but in Italy, basil is regarded as a token of love. Boys in Romania, though, watch out: If you accept a sprig of it from your girlfriend, consider yourself engaged.

Where would we be without the folklore of food?

Last night, I made tomato and basil soup. It’s a recipe that isn’t so precise; I tend to use what’s on hand or readily available. I’ve used canned San Marzano tomatoes before. Heirloom tomatoes are beginning to show up, so I used a couple of those. Basil is abundant now.

Also, here’s a take on chicken salad. I had some chicken breasts languishing in the refrigerator, and I wasn’t ready to concede that they were going to the dog, so I boiled up the chicken in the morning, then made a salad at my leisure. And the dog? I saved one of three chicken breasts to garnish her bowl of kibble.

Blanche the tomatoes so you can peel the skins easily. Put them in a colander and run cold water over them so the cooking stops. Peel, chop roughly and drain the seeds, then put them in a food processor. Add some salt and pepper.

Sautee the onion and chopped garlic in the oil. Cook for about 10 minutes over medium heat. Add the chicken stock, pulsed tomatoes and basil. The basil will lose flavor in cooking, so that’s why you’ll need the fresh later. Simmer the mixture for 45 minutes or so, tasting from time to time and adding salt and pepper as needed.

Now throw in the fresh basil and simmer for another five minutes. Serve immediately. You can add freshly grated Parmesan cheese at the table, and some people like a dollop of sour cream.

Chicken salad (serves 4, never said it was low in calories, but the soup isn’t too bad)

1/3 of a block of cream cheese, softened

Boil the chicken breasts until they are done all the way through. Let them cool. Mix the cream cheese, mayo and lemon juice together. Season with salt and pepper.