About last night and moving forward… 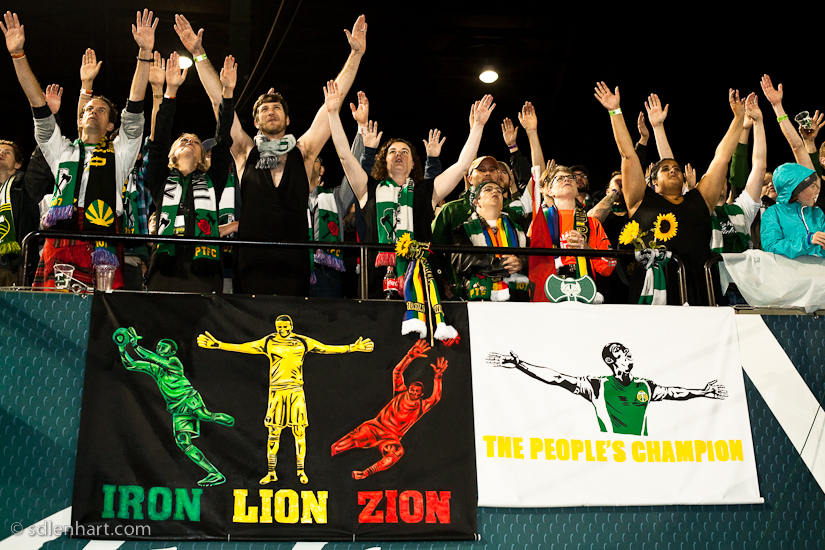 Without a doubt the Timbers took another awful injury blow to their squad last night when Ben Zemanski took a nasty knock in a knee and ended up tearing his ACL – according to multiple sources yesterday.

To boot – if you will – the cool night wasn’t just a bit chilly for the supporters it was also a bit chilly for the players – and it didn’t help seeing a Referee who had absolutely no control – consistently inconsistent – in calling that game…  I guess it’s pre-season for the Referee’s as well.

I hope the Referee Assessor, in the media booth last night, took many notes – if memory serves that assessor is a very good assessor and does a great job of removing emotion from the equation – something I admit I’m not yet willing to do at this time…

What we saw – at least in the early stages – were a couple of good through balls and some pretty good play leading up to creating some shots taken.  What we didn’t see was finishing…  so part good and part bad.

I think most would agree that Nat Borchers (and for the most part) Liam Ridgewell did well as the Center-backs – pretty much a weakness from the start of the season all the way out to about game 24 or 25.

In that I would submit we also saw some good play by both Powell and Villafana – the challenge, especially after seeing Ben go off – is – and probably will remain – the midfield linking directly with the strikers in order to put in good balls that can generate quality shots taken.

I say strikers, as it’s clear Gaston Fernandez is not going to be a one for one replacement for Diego Valeri – he’s a one-of-two pairing with Fenando Adi…  while it looked like Darlington was trying to be the playmaker – if you will…

So what does that mean for this Wednesday?

For me it means Dairon Asprilla and Michael Nanchoff are absolutely critical in getting it right this Wednesday.  Why? Because I think we already know Maxi Urruti can score – and – again – it’s the linkage that matters.

As for the central defending midfielders….

Figure George Fochive and Nick Besler will get a look-in.  How much time Jack Jewsbury has depends – he may start, if he does i figure he’ll get subbed to save his legs for Saturday.

If Jewsbury starts my guess is Fochive is his partner – for the simple reason that he has more minutes in a highly competitive league than Nick Besler.  George had over 800 minutes with USL Champions Sacramento last year – while Besler was still playing part time soccer in College.

Another reason I see George starting (over Besler) comes down to the physical nature of this game.  In speaking with Caleb the other day he acknowledged that Besler is more of a finesse type central midfielder instead of a guy who uses his strength, hips, and shoulders to physically move a player off the ball.

With respect to the back-four; O’Rourke remains unsigned so it’s likely he gets minutes to see if his legs can withstand a full 80-90 minutes.  Others joining him should include Jeanderson, Paparatto, and probably Peay.

All told that puts Urruti, Schuma?, Nanchoff, Asprilla, Fochive, Jewsbury (Besler), Peay, O’Rourke, Paparatto, Jeanderson – along with Weber…  So the game Wednesday evening is more about who performs best, in their role, with respect to the team, and how that role fits in with the first eleven.