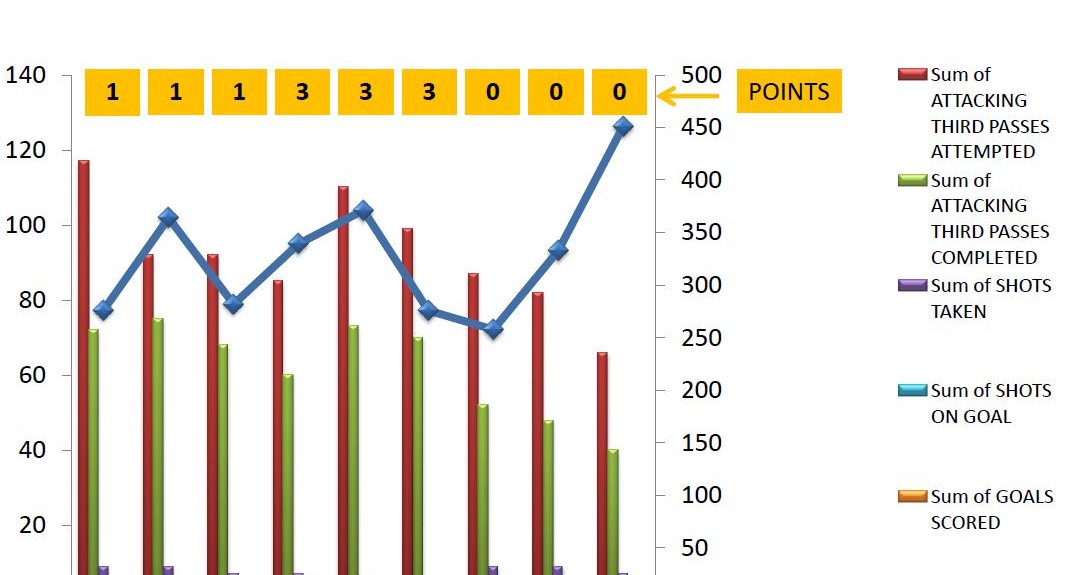 Not since Caleb Porter has been in charge have the Timbers offered up lower totals (across the board) in attacking the final third. Clearly today was not a banner day for the Timbers.

Give credit where credit is due – the Rapids outplayed the Timbers in almost every category today… solid team result for the Rapids and something for Mastroeni to work from as his team works to rebuild after the betrayal of Pareja.

To clarify what I mean… here’s a diagram covering some key bits of info for Timbers games in 2013 that had similar characteristics. The blue line represents the total number of passes offered in this game while the red, green and other bars represent key indicators in the attacking final third. Caleb noted that the team worked towards their strategy and were doing well; the statistics support his thoughts to an extent.

In looking at the outputs there were times last year where Portland got three points, a draw or a loss – in this particular game – after those PK’s the obvious was a loss.

Besides lack of penetration and creation of goal scoring opportunities a few other statistics to consider – the Timbers had just one, yes one, Throw-in in the final third and they were offside 8 times…

So even though the Timbers were very effective in the midfield when it came to defending and recovering the ball there were two specific instances that, while isolated, weren’t unique. All game long the Rapids had done well penetrating down their left side – so to call that an isolated incident is probably inaccurate.

With that said I’m not going to harp on anything else – it’s not appropriate. These guys are professionals – they’ll be more pissed about the result of this game than any supporter will be.

The most productive thing to do about a game like this is to put it as far behind as possible and move on. A short memory is critical in a long season…