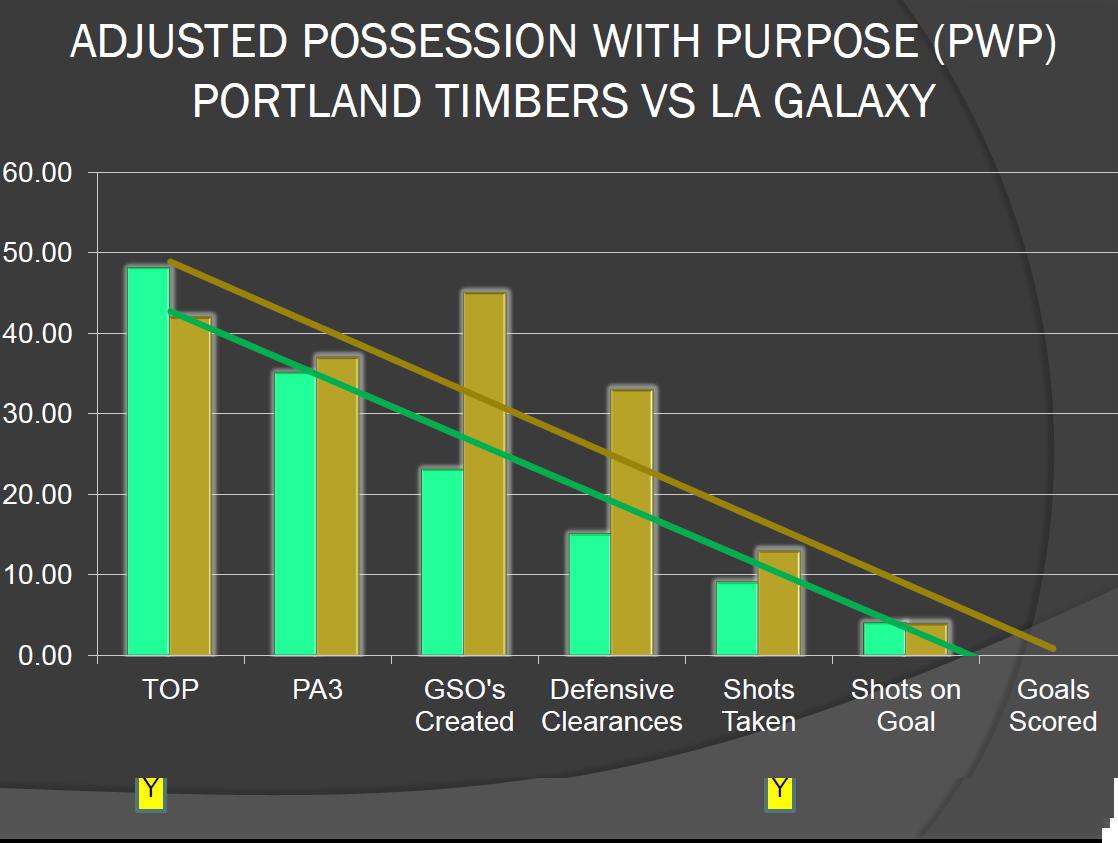 Just one more game in the trek of 34 – we’re almost at the halfway point and still the Timbers have yet to lose on the road! Wow!!

Last night was a superb example of Possession with Purpose where possession itself was just as effective in holding the opponent down as penetrating, creating goal scoring opportunities and scoring goals.

Oddly enough, in terms of possession, penetrations and creation of goal scoring opportunities this game was quite close to the game against Chicago but with one big difference; the Portland Timbers and LA Galaxy defense.  More later on that but for now here’s my walk through on the stuff that may have had some relevance or influence in part of the outcome for this game.

Stubhub Center Stadium – Near capacity last night – attendance figures indicated 23,657 turned there 47, 314 somewhat smog filled eyes towards the pitch.   And while I didn’t offer up any juice on the pitch in my pregame it should be noted how sticky and long the grass appeared to be.

There were a number of occasions where a ball normally played from the back-four, would easily slide past the end-line.  But on this pitch, in this game, some fell short by as many as 5 to 10 yards.  That may have had to do with a Rugby match being played there recently but I’m more inclined to think it was more to do with the Galaxy groundskeeper setting conditions to disrupt the ground passing game of Portland.

Standings – Well at last there was a slight change!  Portland are now tied for second and here’s what that array of points in the league table looks like from my possession with purpose effort; one phrase comes to mind when I view this — consistency of purpose –. Formation – As noted in my match preview Bruce Arena would probably work from a 4-4-2 and rotate his players here, there and everywhere.  They did but it didn’t really change the face of their attack until late in the second half when Rogers came off and Clark appeared.

Up until that point LA had been pretty consistent in pressing their right (our left) in attack.  All told 46% of their penetrations came down the right side and by the 60 minute mark they had penetrated over 57% down the right.

It was only the last 30 minutes where Arena changed focus and started to work down their left side and that also seemed to correspond with Clark entering the game.

And while this OPTA graph doesn’t seem to indicate that much overall activity for Clark you can see that his entrance did alter penetrations somewhat given the rotation of Rogers to the left in the second half.  Note in that graph the flags in the lower portion of the screen – Rogers activity was down the left in the second half while being primarily down the right in the first.

With respect to Portland – same same really (4-3-3) – whatever you want to call it  Porter played Chara and Johnson as bucket midfielders while pinching his forwards in and around the middle while rotating his fullbacks up higher as projected in my preview.

Goals Scored – None…  I could offer up some other thoughts here but will wait till all three games have been played; for now though I really wish I had a picture of Keane’s face and hands as he was looking for the ball after Baptiste baptized him…

Curved Air – Time for some grist…

As advertised LA would pound the right for the better part of the game – here’s their penetration chart to go along with all other opponents Portland have faced this year.  (LAG – far right on the diagram). Note the far bar in this diagram; LA penetrated down their right – our left – 46% of the time they got into our defending third.  Of that LA Galaxy created All told those percentages equated to 19 GSO’s from the right, 11 from down the middle and 15 from the left.  A couple of things from this…

1.  Even while penetrating down their right LA did a good job of rotating that ball once inside the Timbers defending third.  In other words they penetrated down the right side 17 times but managed to generate 19 GSO’s from that penetration.

2.  In total, LA penetrated 39 times, yet they generated 45 GSO’s; pretty much meaning they had multiple opportunities to generate goals from fewer penetrations.  Indeed they had at least 10 corner kicks which means the ball was retained a bit more than simply being cleared by Portland.

3.  Given that increase in opportunities Portland really did a great job of holding LA scoreless and to give you a better idea of the onslaught faced by Portland; they made 33 defensive clearances this game.

What about Portland?  You should know by now that I don’t offer up that type of detail – if others outside of Portland want to know that they can research that themselves.

Instead let me just offer that there was a slight twist to this game in penetration and creation of goal scoring opportunities.  And I think it had more to do with Porter seeing openings based upon the defensive weaknesses of the opponent.

However sliced there was balance when it came time to creating goal scoring opportunities and some advantages taken against Robbie Rogers in the first half.

In terms of balls from Square 1 – Balance was offered up from LA while Portland pretty much concentrated on getting the ball up top based upon Donovan and Keane pinching in to prevent transfer to the center-backs.

This didn’t translate to other ball possession type movement, after possession was gained, but it did bring Ryan Johnson in as a ‘target’ player for those initial long balls by Ricketts.

Possession – Overall Portland had more possession of the ball even though LA generated more penetrations and more goal scoring opportunities.  The real proof of that can be seen when viewing that data in 15 minute increments. True to expectation, for many, was the significant push by LA to get an early goal.  They took that same approach with Seattle and basically rode the tidal wave home as they drowned the Sounders.

No such luck here.  In almost every stage of this game LA applied pressure but, as noted, they did not control the ball nearly as much.

For me that is a great example of a defense first – defense second – possession with purpose approach; control the ball for good lengths of time simply to keep the ball from the opponent.

There is nothing wrong with this approach and if you recall the game against Chicago, Portland also had more possession but fewer penetrations (32 vs 42) and fewer goal scoring opportunities (26 vs 49) .  The single biggest difference there was goals scored and only goals scored.

Defense – To paint a different picture here is the overall view on the APWP for LA and Portland this game followed by that same array of data to compare things against the game against Chicago: The similarities are striking really – so the real takeaway here is the LA Galaxy have a much better defensive team than Chicago and the Portland Timbers had perhaps one of their best defensive performances of the year!  Again, taking experience from previous games and learning from it…

What is really superb about this was the injection of Ryan Miller into the squad in lieu of Jack Jewsbury and the superb return of Mister Fantastic back between the pipes for Portland.  Enuf said here…  I can only hope that Michael Harrington has just a small knock as opposed to something that will keep him out for weeks.

Wild Things – Geez… talk about an early Yellow that looked dodgy; thankfully Kah kept his kool while killing Keane and krushing Donovan.  As for AJ Baptiste – Keane was baptized by fire as Drew duped and dodged and dissed him throughout.

With respect to LA; they nearly hit their high point this game (19 fouls) by conceding 16 – shame really that another 3 or 4 weren’t offered up by them late on…

Substitutes – As noted in my match preview, if they didn’t start both Piquionne and Zemanski would be first off the bench.  They were and did their job with Piq having some brilliant clearances on a number of late game corners by LA.

It was also good to see Sal on the bench and his call towards the end.  I personally thought Kalif had a pretty good game and with the high pressure applied by LA nobody really had significant time and space to generate very much.

To give you and idea of this here’s the OPTA diagram on the defensive layout for Portland and then the layout for LA.

Note the significant difference in where the Galaxy got engaged as opposed to Portland.  LA were engaging much higher up the pitch while Portland remained more compact in the defending half.

As for LA – the notable substitution for me was Clark coming on for Robbie Rogers.  It’s good to see Rogers get some playing time so that he can transition back to being a soccer player instead of media target.  He played well and thankfully he did not overly influence the result of this game in favor of LA.

In closing – No rest for the wicked – next up Colorado, who are much improved since we saw them last.  This should be another great game in a string of great games.

PS:  I have also recently created a Facebook Group for those who wish to talk about “Possession with Purpose” – feel free to join – it is an open group.

And yes I owe two things – one – an upcoming introduction on the creation of the Timbers Army Covert Ops and – two- some further analysis on how Portland may have been impacted with and without Mikael Silvestre… not sure how that will take shape but will do my best Jon.

Next Up Match Preview – Portland Timbers vs Colorado Rapids