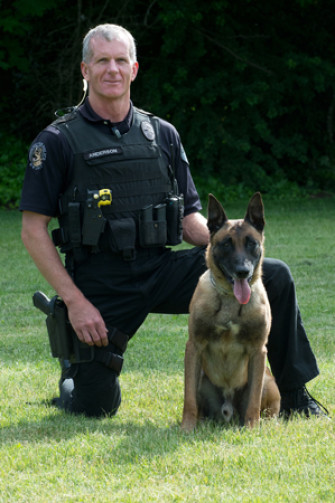 A Vancouver police dog who was in the midst of helping police apprehend a suspect died this week after being stabbed multiple times.

On Wednesday, Karuo was in Clark County Superior Court facing charges of first-degree criminal impersonation and harming a police dog. Harming a police dog is a class C felony with a maximum sentence of five years in prison. The court can also impose a civil penalty of up to $10,000 for killing a police dog.

There’s a reason a stiff penalty comes with killing a police dog – beyond simply punishing someone for a cruel act.

It’s expensive to train police dogs and its taxpayers foot the bill.

In 2012, Sen. Ann Rivers, R-La Center, inspired by the stabbing death of a Clark County Sheriff’s tracking dog, championed a measure to create a $5,000 penalty for harming a police dog and a $10,000 for killing one.

“I was named legislator of the year on that,” Rivers said, calling police K-9s “amazing creatures.”

“So when the animal is lost in the course of doing its duty, it’s not only devastating to the handler but to the taxpayers as well,” Rivers said.

The law also prevents a convicted criminal from suing if they are in injured by the dog while being apprehended.

It “moves police dogs from the vicious animals classification, preventing frivolous lawsuits from criminals, who have nothing but time in jail to figure out how to get money out of the state,” Rivers said on the House floor while advocating for the bill.

Many people will be unable to pay the fine, Rivers noted.

“They may never be able to pay the money back, but if they have the means to pay, they will have to pay,” she said.

Donations should be made to “Vancouver Police Department K-9 Unit,” and Guard is asking that they be mailed to Metropolitan Productions, the company for which Guard serves as president and chief operating officer. The address is: 3644 S St., Washougal, WA 98671.

UPDATE: Kim Kapp, spokeswoman for Vancouver Police Department, said the department will be acquiring a new K-9 in the wake of Ike’s death. Any money donated will help support costs associated from having dogs on the police force.