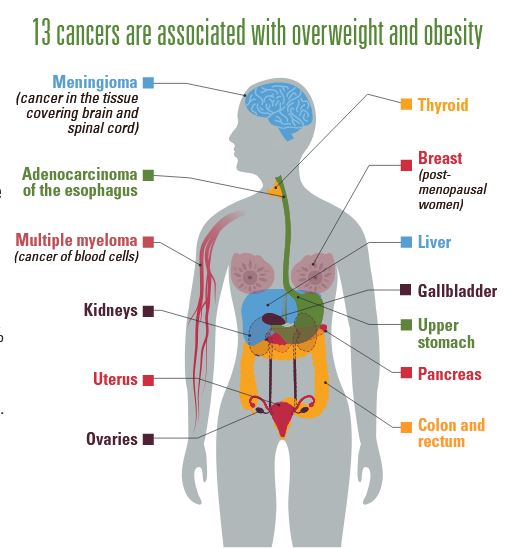 Overweight and obesity are associated with an increased risk of 13 types of cancer, accounting for about 40 percent of all U.S. cancer diagnoses.

A new Vital Signs report by the Centers for Disease Control and Prevention shows that the overall rate of new cancer cases has been on a downward trend. But increases in overweight- and obesity-related cancers are likely slowing that trend.

“A majority of American adults weigh more than recommended – and being overweight or obese puts people at higher risk for a number of cancers – so these findings are a cause for concern,” said CDC Director Dr. Brenda Fitzgerald, in a news release. “By getting to and keeping a healthy weight, we all can play a role in cancer prevention.”

In 2014, about 630,000 people in the U.S. were diagnosed with a cancer associated with overweight and obesity, according to the CDC. The rates of obesity-related cancers (not including colorectal cancer) increased by 7 percent between 2005 and 2014.

About two-thirds of Americans are overweight or obese, and more than half of Americans don’t know it can increase their risk for cancer, according to the CDC.