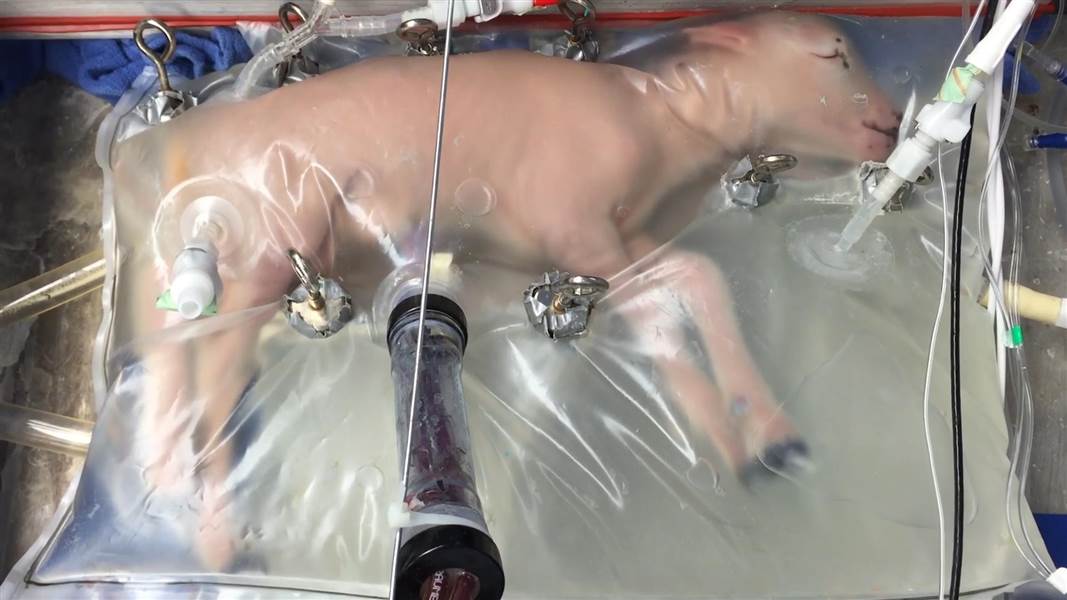 Science is so cool.

Researchers at Children’s Hospital of Philadelphia created an artificial womb they hope to someday use for extremely premature human infants.

The researchers created a bag-like container, filled with fluid, to simulate how fetuses float in amniotic fluid inside a woman’s uterus. They then attached it to a mechanical placenta that kept the blood oxygenated.

During the testing, the premature lambs appeared to grow normally in the artificial womb for three to four weeks.

“We start with a tiny fetus that is pretty inert and spends most of its time sleeping. Over four weeks we see that fetus open its eyes, grow wool, breathe, swim,” Dr. Emily Partridge, a research fellow and author of the study, told the Associated Press.

Human testing is still three to five years away, according to the AP article.

The idea would be to use the system for extremely premature infants – those born before 26 weeks gestation, even as early as 22 to 23 weeks. Extreme prematurity is a leading cause of infant mortality and serious disability among infants.

“One of the biggest risks for very young preemies is that their lungs aren’t ready to breathe air. Before birth, amniotic fluid flows into their lungs, bringing growth factors crucial for proper lung development. When they’re born too soon, doctors hook preemies to ventilators to keep them alive but risking lifelong lung damage,” according to the AP article.

The goal with the artificial womb would be to support those preemies for just a few weeks, until their organs are mature enough to better handle regular hospital care like older preemies.

With the lambs, the researchers tests five lambs whose biological age was equivalent to 23-week human preemies and three a little bit older. All appeared to grow normally, with key health measures stable while in the bag-like womb.