School lunches are getting healthier 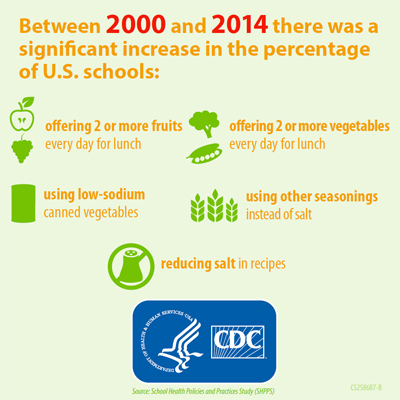 In the last decade, the number of schools offering more whole grains, fruits and vegetables and using less sodium have increased significantly, according to the Centers for Disease Control and Prevention.

CDC researchers analyzed school data from 2000, 2006 and 2014 to see how well schools are implementing practices to meet nutrition standards for school meals.

The standards require serving more fruits, vegetables and whole grains and gradually reducing sodium over 10 years. Between 2000 and 2014, the percentage of schools implementing five of the nine reviewed school nutrition practices has increased significantly, according to the CDC.

Here are some of the key findings from 2014:

– Most schools offered two or more vegetables (79 percent) and two or more fruits (78 percent) each day for lunch. That’s up from 62 percent and 68 percent, respectively, in 2000.

– More than half of schools that prepared meals at the school used fresh or frozen vegetables instead of canned (54 percent) or used low-sodium canned vegetables (52 percent).

– About 65 percent of schools that prepared meals at the school used other seasonings instead of salt; 68 percent reduced the amount of sodium in recipes.

“School meals are healthier now than ever before,” said CDC Director Dr. Tom Frieden in a news release. “We’ve made real progress, but there is much more to do to help American children make food choices that will keep them healthy throughout their lives.”