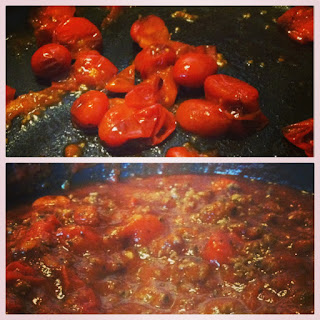 I’ve been having a taste for…Spaghetti with meat sauce. So, I gave in. It’s okay every once in a while to indulge. The main thing is to not overindulge and of course to make it at home in your very own kitchen using whole ingredients. I’ve never been one to make substitutes like broccoli instead of pasta. Or light sour cream instead of sour cream. I just go for it and eat less (sometimes). I did make an exception and served the hearty meat sauce over whole wheat pasta. To round out the meal: A garden green salad and crusty Italian bread. Now, that’s Sunday dinner, OUTSIDE of the Box!