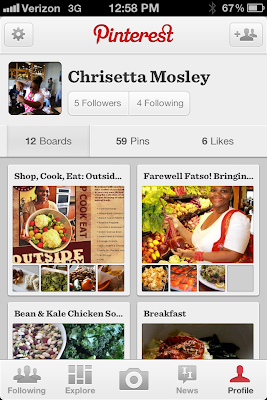 I’ve heard about and seen photos from Pinterest for a while now, but never really thought much about creating my own account. Recently, a couple people have mentioned maybe I should showcase my food photos on Pinterest. So, finally I done just that.

Funny thing is after I spent the entire day posting board after board and pinning photo after photo. I started actually browsing other folks Pinterest pages. After peeking around for a while I noticed that their pages looked nothing like mine. They had photos of lots of different stuff, from more than one category, and from lots of different people. I set my page up with ONLY my photos, my food photos.

After browsing I surmised  the concept of Pinterest was not to ONLY share my photos, but more about me finding other photos that I liked and repinning them. Ha. I laughed hysterically at myself and then left the page as is. Sure, I may now and then repin photos if I find them appealing, fun, or interesting. But, I kinda like my page the way it is. Besides, I’ve always been more of a leader than a follower. What can I say? I’m OUTSIDE of the Box in all aspects, including Pinterest.

I’m here, there, everywhere in the community sharing my love for good food with you and NOW on Pinterest too!

Interested in following me on social media? Here’s a link to my accounts: