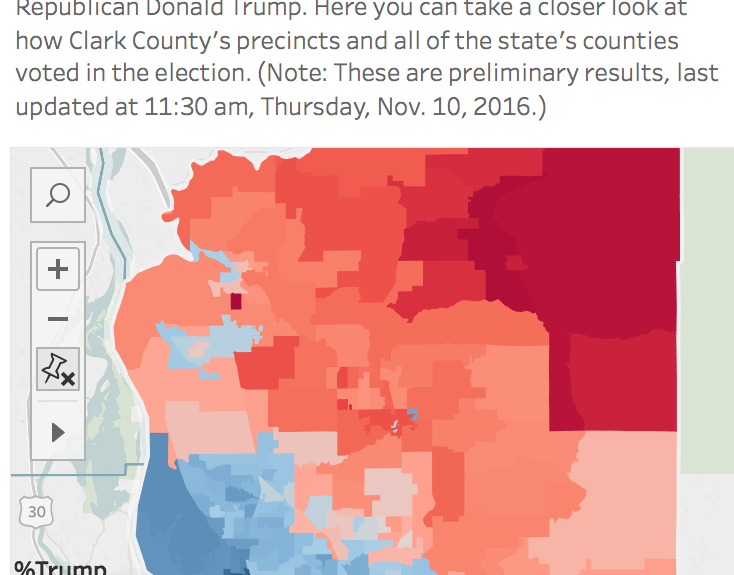 Clark County’s Elections Office is still counting ballots but the vast majority have been tallied, so far giving Democrat Hillary Clinton a slight edge over Republican President-elect Donald Trump, 46.1% to 44.3% as of Wednesday night.

Below you can see maps showing how the county’s precincts voted and how each of the state’s 39 counties voted (with data from the Washington State Secretary of State’s office), and you can see Clark County and the state mirror the rest of the country with pockets of urban blues surrounded by suburban pinks and rural reds.

In the county, Vancouver, Camas, Ridgefield and Woodland are strong or leaning Democrat, while the rest of the county leans or is staunchly Republican. It’s easy to see how the state’s 49th Legislative District keeps electing Democrats while the 17th and 18th elect Republicans.

At the state level, you can see strong support for Trump in more rural counties such as Lincoln County near Spokane where 72% voted for the Republican billionaire. That support flips to Clinton, of course, in the more densely populated urban counties along the Puget Sound, especially King County where 73.6% voted for the former Secretary of State and U.S. Senator.

For more election results, visit our Election 2016 page. We will be updating the local results as more information becomes available.