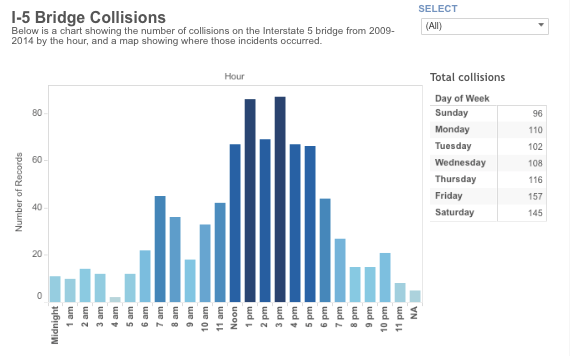 What’s the worst day and time to cross the I-5 bridge?

Reporter Dameon Pesanti, who covers transportation for The Columbian, wanted to know so earlier this spring he set out to find the answer, obtaining data from the Washington and Oregon State Departments of Transportation. Both agencies provided us with five years worth of data from 2009 to 2014 (WSDOT even had 2015 but ODOT’s still processing last year’s data so we filtered that out).

The answer is 3 pm on a Friday, though Saturday is equally as bad. Overall, though, Friday is the worst day of the week for fender benders on the bridge with 157 to Saturday’s 145. You can see this information and much more, including a map of the 800-plus accidents, in our data visualization below.

But what about other days of the week? Is 3 pm the witching hour every day? And do these trends hold steady year after year or do things fluctuate from year to year? Tne answers: No and yes. On Tuesdays, the worst time of day is 4 pm, just as rush hour is really ramping up. On Wednesdays, it’s even later at 5 pm. But don’t just take our word for it, you can slice and dice the data yourself with the visualization above, or this one below.