Another look at pedestrians vs vehicles 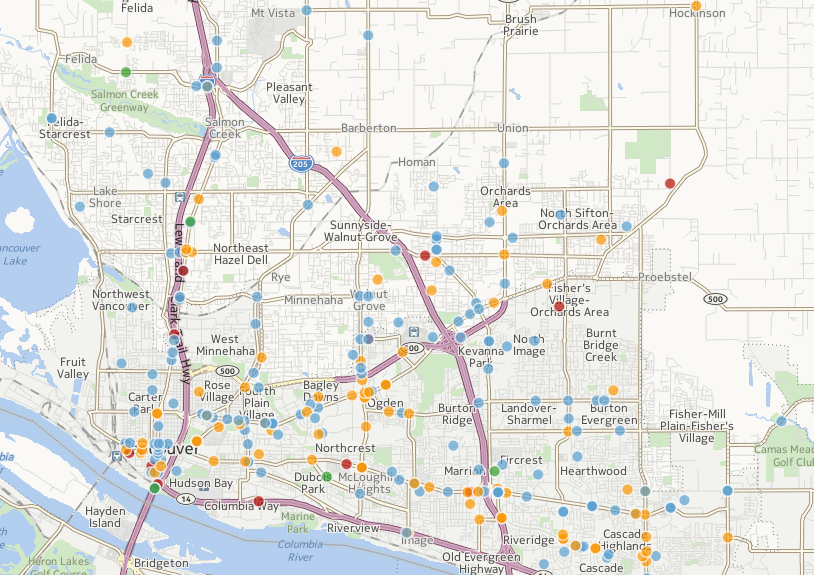 When do most pedestrian-vehicle collisions occur in Clark County: daylight or darkness?

Do most of those collisions occur on days that are: a) rainy, b) dry or c) cloudy or other?

Where do most of the collisions take place: a) rural roadways often lacking sidewalks, b) residential streets or c) busy arterials with sidewalks, crosswalks and other safety features?

You might be surprised to learn that most of the collisions occur during daylight hours and on dry pavement, and often on busy roads with sidewalks, crosswalks and other safety features like the traffic beacons the city of Vancouver is installing in some parts of the city, according to a story by reporter Emily Gillespie.

We know all of this because we recently combed through nearly 800 records from the Washington State Department of Transportation after the deaths of two women crossing a road in the VanMall neighborhood in January, an incident that closely followed another death of a man struck by a vehicle in October. Combined with other incidents in the past year, we were beginning to wonder, is it more dangerous for people here to cross the roadways?

The answer: Yes and no.

After analyzing data, we found that the number of injuries and fatalities resulting from pedestrian-vehicle collisions is pretty steady.

On the flipside, we also found that 16.7% of the 210 people killed in collisions in Clark County from 2004-2013 were pedestrians. That percentage puts us behind only King and Snohomish counties in this state.

Interestingly, we found something we didn’t expect as we combed through the data: In about two-thirds of the 35 pedestrian fatalities from 2004 to 2013, the pedestrian was doing something that put him or herself in some danger whether it was walking in the road, crossing against the signal or being under the influence of drugs or alcohol.

To see where the fatal collisions occurred, we created a map, and then to see more than just the fatal incidents we built another map showing all of the pedestrian-vehicle collisions from 2010-2013 (below).

Building these maps proved to be a challenge since each record doesn’t come with precise coordinates for the collision. Instead, each record contains the primary roadway and, if applicable, the block number, milepost and/or distance from a reference point. It also contains the intersecting roadway if there is one. What it didn’t contain was any information about the codes used for county roadways instead of road names, as well as the codes the state uses for some of the state routes and interstates, including on- and off-ramps. Thankfully, the county’s public works department helped me out with deciphering the county roadways and WSDOT pointed me toward maps they keep online that provided a key for their codes.

Armed with that information, I then needed to get the geo-coordinates for each collision or, in other words, the latitude and longitude. For some records, this meant manually locating points on Google maps and then getting the lat and long from Google. For the bulk of the records, though, I was lucky enough to be able to use a so-called batch geocoder to get the latitude and longitude for each point.

If you’re interested, here are the two sets of data: Ped-Veh Collisions 2010-14 and WSDOT Summaries by County.