Divorce and the economy 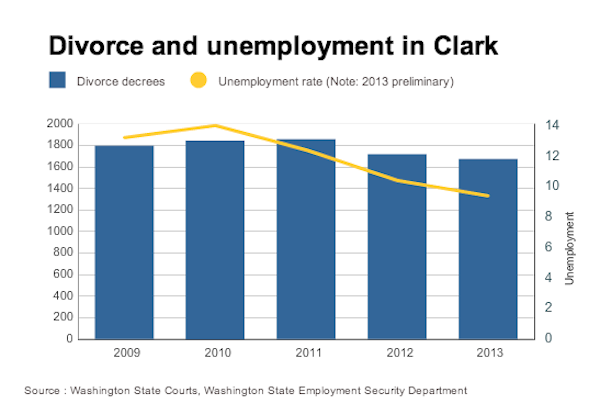 Earlier this week, something The Atlantic tweeted out caught my eye. It said, “Why More Divorces Are a Good Sign for the Economy.” The basic premise is that when the economy isn’t doing so great, people tend to stay married because it’s expensive to split up, and there are studies that apparently back this up. One study cited by The Atlantic states that when unemployment goes up, the divorce rate falls.

But does that assertion holds up in Clark County? If you look only at unemployment, the answer is no. The number of divorces granted here over the past five years has fluctuated somewhat, peaking in 2010 and 2011 but that’s also when unemployment hit its zenith (see chart below).

So what gives? The economy is improving in Clark County, but divorce appears to be on the decline here when it should have gone up as couples saw new windows of opportunity. I have to wonder if maybe an improving economy could have the opposite effect, giving marriages a boost as quarrels over jobs and money begin to fade away.

What do you think?