Working to create a digital spark 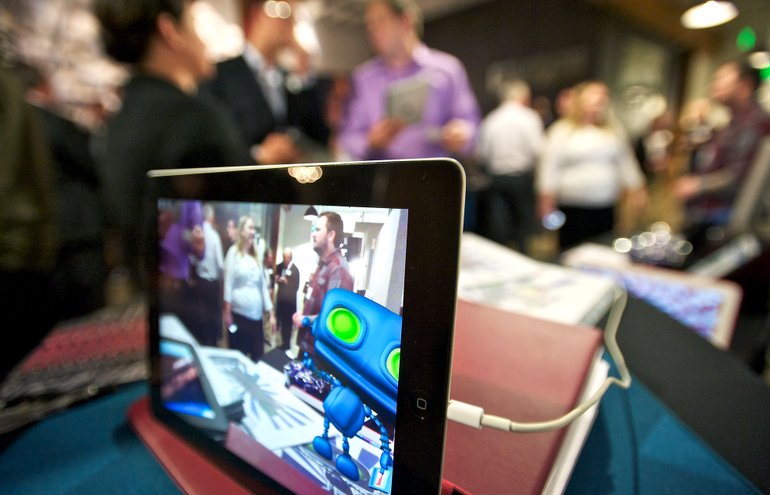 First, in the interests of disclosure, let me tell you that I serve on the advisory committee for the Creative Media and Digital Culture program at Washington State University in Vancouver. I’m also a graduate of WSU in Pullman and, as the web editor for The Columbian and a former IT guy here, I am an admittedly biased fan of the ever-increasing world of digital storytelling and media (though I grew up on and still enjoy reading print).

Now that we have that out of the way, let me say you don’t have to be a nerd like me to see what I see whenever I run into students in the CMDC program.

There’s a gleam in their eyes. WSUV’s Dene Grigar addresses the crowd at the digital showcase.

They are excited about what they’re learning and more importantly doing, which has translated into success for many of them. According to CMDC program director and associate professor Dene Grigar (@dgrigar), about 90 percent of the program’s students have found jobs in Clark County. The Columbian has employed a few as interns and staffers, including a friend and our former social media coordinator Matt Wastradowski (@wastro).

On Wednesday night, you could see some of what they’re doing at Gravitate Design in downtown Vancouver for the first-ever “Digital Innovation Showcase” supported by Columbia River Economic Development Council and others. As reporter Aaron Corvin put it in his story: “It was a time to network, show off state-of-the-art products and to tout the recent crowning of parts of Vancouver and Camas as an Innovation Partnership Zone, or IPZ — all in the name of encouraging the region to carve a bigger and more distinctive place for itself in the global tech sector.”

At that showcase, you could learn more about a social media project by students Lizette Santiago, Melissa Fuger and Maxine Damore to help build enagement for Stemagination, a project McLoughlin Middle School teacher Cyndy Hagin aimed at getting girls involved with STEM.

You could also learn more about new tools for digital storytelling, ways to use augmented reality in education, an award-winning mobile history project, a social media-driven audio collaboration tool and an impressive project called iSCI. The latter is a prototype for teaching science in ways that only a few years ago seemed like science fiction. Using tools and devices many of us already have — like a Kinect Game System, a Wii Remote, a Falcon Game Controller, and augmented reality software on an iPad — kids can pull up a 3-D animated image of say a salt molecule and then move atomic particles around.

As a parent of a high schooler, I could immediately see the potential as student Aaron Wintersong demonstrated iSCI for me (they’ve also demonstrated it for U.S. Sen. Maria Cantwell), explaining the goal is to give teachers a new tool that helps “create that spark” to engage kids in science like never before.

I couldn’t help but see that same spark in Aaron and others at the digital showcase.