When the Sidewalk Never Ends 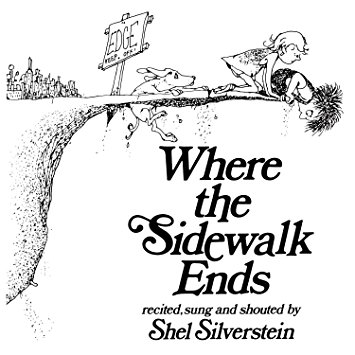 I don’t remember how old I was when my mom brought home a copy of Shel Silverstein’s Where the Sidewalk Ends, but I know it’s the first book of poems that I remember reading. I still have my copies of both that book, as well as A Light in the Attic, and while both are tattered, and leaking from their seams, they have been forever loved, and forever staples in my book collection.

I grew up in a household of readers – my father is a collector of all things Sherlock Holmes, and my mother a school teacher who loves books. There was never a time where I wasn’t surrounded by words. In fact, in my childhood bedroom, my dad kept one of his bookcases because he had run out of room in his upstairs library. My middle name is Holmes. I’m not happy about it.

Some of my earliest memories are my mother tucking me in at night, underneath the same two blue blankets that I kept on my bed until my wife finally threw them away, and reading to me from The Many Adventures of Winnie the Pooh. I don’t think we ever outgrew that book, reading those stories over and over again until I could recite each one of them from memory.

When I was a child, I was never very fascinated with television, and so books were all I wanted, and when I wasn’t outside playing with friends, book were all I had. I read anything I could get my hands on, and devoured everything around me: fiction, non-fiction, historical novels, choose your own adventures, and poetry.

I remember after reading through the Shel Silverstein books, I wanted to start writing my own pieces. My first poem was called “I’m Rubber, and You’re Glue,” and while I’m sure the spelling was wrong, and I know I copied the title and idea, my 5-year-old self was so excited when my mom read it and put it up on the fridge. It was a shining moment for a burgeoning authorPossibly plagiarized, but a shining moment nonetheless. I was going to be a writer when I grew up!

It’s funny though, because I don’t remember any books of poetry between Shel Silverstein, and my discovery of Langston Hughes in my junior year of high school. Ms. Wood, my English teacher both freshman and junior year, had us write a paper on an American Poet. I was having a really difficult time deciding who I would choose. I didn’t know a lot of names, and I remember going back and forth between Adrianne Rich and Langston Hughes. Eventually, either she got tired of waiting for me, or she saw something in me that made her hand me Hughes’ name on a sheet of paper. It was life-changing. I couldn’t get enough of him – still can’t! I wanted to read everything he’d ever written, from his earliest poems through his communist party brochures, and children’s books, and essays, and everything in between. The music in his words spoke to me like Silverstein’s had when I was just a child, except for this time, I was learning about a much more adult world.

In college, I ventured from Hughes to Yeats, and Keats, and Browning, and Shelly, and Donne, and Blake, and Wordsworth, and my fascination with 16th through 19th century British poetry grew at an increasing rate. The bleakness of their words, the raw honesty, and emotion with which they wrote. The way that I could see everything that happened in their time just by reading a short stanza. It was so enthralling.

As time has moved on, I have fallen in love with new poets – Rudy Francisco, Taylor Mali, Shane Koyczan, Mark Halliday, Donald Justice, Shihan, and so many more – and I’ve continued to learn from each and every one of them.

What I have found, as a reader, is that the sidewalk never ends; there is always another adventure from which to choose, another path yet traveled. Reading isn’t just fundamental, it is essential to the soul. Read to yourself, to your children, to your friends, to a stranger at a bus stop, but never stop reading.