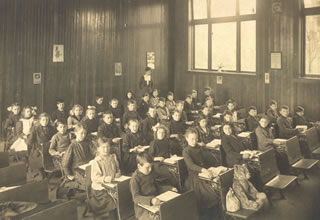 In the beginning there were desks. There was a chalkboard. There was a podium. There were students in rows, pencils at the ready, notebooks opened, and a sage on the stage who preached grammar, and geography, and math, but gave no thought to the students in front of them. They were there to listen, learn, keep their mouths shut, and their bodies at attention, always.

In the pictures from the late 19th century and early 20th century make education look so drab, dry, and boring. Everyone in uniforms. No creativity from a visual sense, or an educational sense. Teachers were not designing their unit plans, or bringing in materials that would inspire most students. Instead, they taught straight from textbooks, or lectured on minutia they thought was important. So, why hasn’t it changed? Why are students still sitting in rows? Why are textbooks still the daily lesson plan? Why are students not standing up, going to stations, having constant conversations, building things, reading from outside materials, and rockin’ all the visual literacy in the everyday world. Why are so many teachers so unwilling to grow with their students, learn from their students, and provide students with materials that truly engage the stakeholders in the classroom.

My experience as a student was not very positive. In all of high school, I think I really connected with two teachers. I didn’t enjoy being there. I wanted to read, and write, and learn about why I wanted to read and write. But I was stuck in a desk. I was stuck with the same Language and Literature and Question and Form books that I still see on teacher bookshelves throughout the last three districts in which I’ve worked. I didn’t attend many classes my junior year of high school. I was much more interested in music, my girlfriend, and the library. I didn’t skip school to get stoned; I skipped, and hopped the bus to the downtown Portland library, and read all day long. It was more engaging than school. I learned so much more from picking up Crime and Punishment, or Rolling Stone, than I did from a molding textbook.

One of the main reasons I became a teacher was to make sure that students were not as bored as I had been. I wanted to make sure that I actually met them where they were at, and let them know that they could read materials they wanted, and that we would only use the textbook a couple times a year. If my students wanted to be auto-mechanics, then if we were doing lit circles, or some time of sustained reading, they could bring in auto-manuals. If they loved video games, bring in a guide book. If they wanted to read the newspaper, a magazine, a news-based website, they could do that as well.

And they enjoyed the work.

When we moved through different themes, say Social Justice, students looked for news articles, TV spots, court transcripts, and whatever else they could find that focused on the issue, and could be shared with the class. Instead of raised-hand discussions, we did Philosophical Chairs and Socratic Seminars. My desks were in a U shape so everyone could see everyone else. I didn’t stand in the front of the classroom unless there was a real need. I sat with my students. I worked with my students. I learned from my students.

We are in a mobile world – both in screen and movement. Stagnation leads to a lack of learning. We should be out of our seats, or in groups, or doing something that engages body and brain. We are in the 21st century, and if you are still teaching like it’s the 20th, then you need to catch up with the times.