Semantics in the Era of “Sup?” 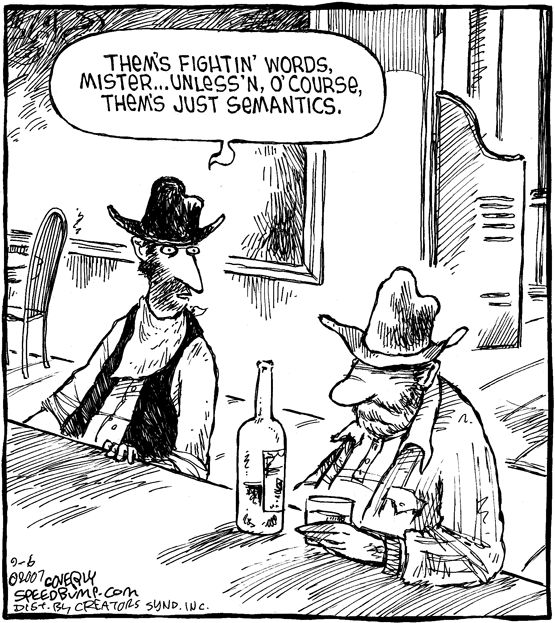 “Semantics semantics you don’t know semantics. Semantics matter, Mom!” my 7-year-old sang to my wife while at the dinner table the other evening. While she sang and pointed, my wife shot me an evil glance, and the kid and I cracked up laughing. It was funny. It was very funny. At the same time, it got me wondering how important the role of semantics is in everyday conversation. My wife hadn’t said anything that was grammatically incorrect, or out of the ordinary for a dinner time conversation, and it didn’t by any means require the grammar police, but I was so proud of the little one that I couldn’t help but give her a hug, and tell her I loved her. It was cute. My wife was frustrated – more that I had taught her the world of word choice at such a young age and that she was willing to sing-song something she thought lacked proper grammar.

But what is the role of semantics in today’s text message, social media, everything-is-shorter, get-to-the-point world? Has colloquialism completely taken over the linguistic landscape? Do students even know about prepositional phrases, and how to properly place a subject within a sentence? Do people even write sentences anymore? In a world where lolling (is that the proper spelling?) has become the norm without ever even laughing, and where a simple “sup?” might grace the phone screen, it seems we have moved into an era where the debate falls around Urban Dictionary definitions, and some text-savy version of the English language.

I used to be the Grammar Police. I used to spend my time trolling Twitter for mistakes made by celebrities. I would retweet them with the grammatically correct version of whatever they were saying, hashtag it with #grammarpolice, and smile because I had changed that person’s life with the tip-tap of keystrokes. I was the friend who would correct text messages, and send them back, or stop people in the middle of sentences to make sure they said the right words. Hell, my wife gets mad that I occasionally stop her in the middle of an argument to point out issues of syntax and semantics. It’s a way for me to deflect from whatever I did wrong, and at least pause the argument for a moment. But it doesn’t work. It’s not nice. It’s not helpful. It doesn’t move anything forward in a positive direction.

As an educator, and someone who believes strongly that semantics and syntax should still drive the English language, I find the Screenager generation abhorrent when it comes to basic dialogue, and written conversation. But I get it; it’s easier to be quick, succinct, and cut out words and letters that some deem unnecessary when sending off a quick “sup?”.

In a memo released by Elon Musk, he states:

“Don’t use acronyms or nonsense words for objects, software, or processes at Tesla. In general, anything that requires an explanation inhibits communication. We don’t want people to have to memorize a glossary just to function at Tesla.”

Avoiding jargon sounds fantastic, but there is a time and place for a proper explanation, and communication without explanation or clarification can be difficult for some people to fully understand; however, does avoiding jargon remove extraneous language? Does it remove the need for syntax and semantics? I’m not sure how this would work in an English classroom – or if it even does.

Will we look back on this generation of colloquialism and brevity as simply a transformation of language, or will language continue to deteriorate into a world of “sup”?