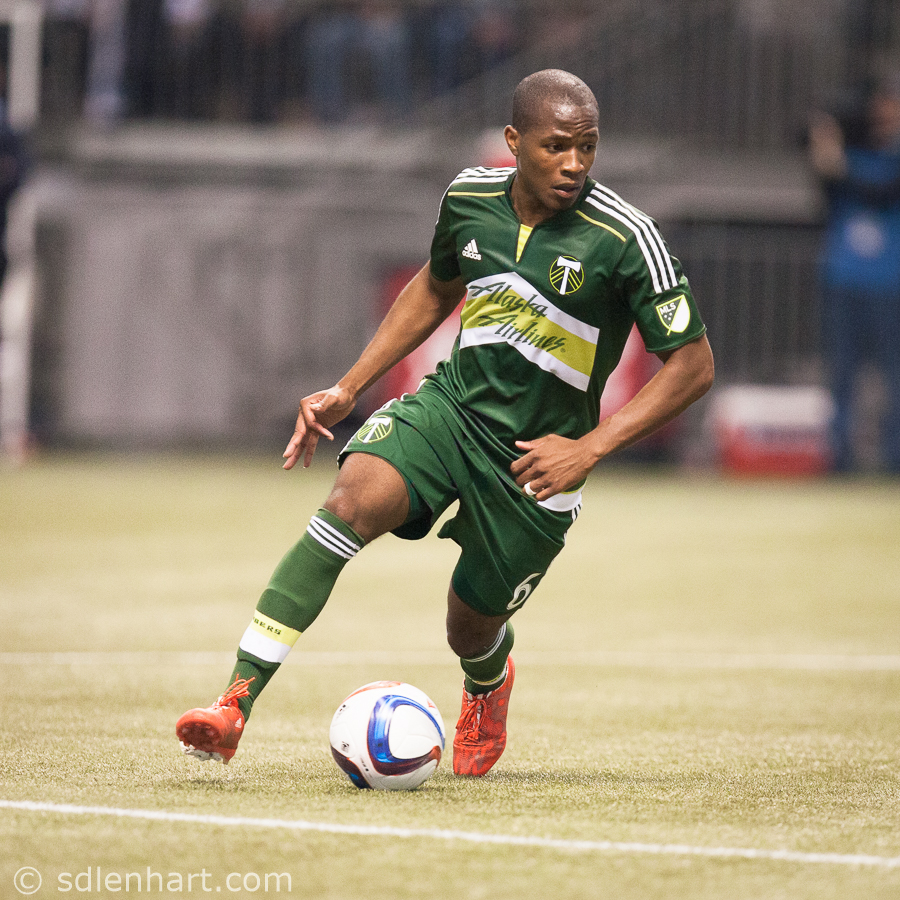 Portland Timbers travel to Colorado for the first time this year and the challenge for both teams is finding the right balance between attacking and defending.

In their last league home game the Timbers struggled in the first half – not unlike their US Open Cup match as well.

If not for an untimely hand-ball by David Horst and a really terrible PK call against the Dynamo goal keeper it’s likely the Timbers come away with a single point… to be sure they were fortunate as the two goals against in the first half were pretty much to standard given their entire defensive unit this year.

So when getting ready for Colorado it’s quite hard to figure who starts and who doesn’t.

Does Taylor Peay start at right back?

He probably should given his higher passing accuracy and what appears to be better, heads-up, defensive positioning but in all likelihood Caleb Porter goes with Alvis Powell.

If you’re a Rapids supporter that’s probably a good thing – nearly 60% of all Dynamo attacking pressure came down Powell’s wing.  And when looking at this diagram below we see Colorado is balanced in penetration (touches) but weighs more towards the left side when taking (shots). In my pre-match scouting report on Houston they weren’t balanced in penetration – nearly 40% of their penetration was down the right side – yet against Portland – Wade Barrett had his team push left… big time!  It’s likely Colorado will do the same.  MLS teams are pretty good at pressing the weak points an opponent has in defending as those players are more likely to make mistakes.

So if you’re a Timbers supporter hopefully the midfielders will add support for Powell.  I figure Diego Chara and Ben Zemanski in a double pivot as the first recourse should be for Portland to get at least one point.

In thinking about the left fullback.

I’m hopeful Zarek Valentin gets the call but Porter has gone with Jermaine Taylor before.  It was Taylor and Powell who paired up during that two-goal outburst by Houston last weekend…  And given the stingy defense of Colorado it’d be a nightmare for Portland to go a goal down in the first ten minutes.

However viewed the fullbacks do not man the wings alone – it’s likely both Chara and Zemanski start in a double pivot as Porter is going to want to give his team a chance to get at least one point.

And with the double pivot that doesn’t mean Darlington Nagbe, Diego Valeri, and Lucas Melano won’t have defensive responsibilities – they will and Melano cannot afford to ball-watch this game.

Here’s the same diagram offering up information on the Timbers attack: Probably a tad more balanced in attacking touches than Colorado – but the same lean towards taking shots from the left sides appears for Portland as well.

Of note – while Portland has played somewhat more direct this year there average number of long passes (per game) is about 10-15 fewer than Colorado – from a tactical viewpoint that probably translates to slightly more MF play between Valeri, Nagbe, (Chara and Zemanski).

It doesn’t mean both teams won’t try to stretch the defensive back-four with long balls – but given Powell’s tendency to push higher up the pitch Nat Borchers might be really busy this game.

A key indicator on the attacking scheme will be to watch how deep and how quickly the fullbacks for Portland push forward – the less tendency to push forward the more likely Porter is thinking defense first.

So how do the fullbacks work in Colorado?  I asked Chris Brown, to share his thoughts with me on Friday:

Colorado’s fullbacks have been key in shutting down attacking threats, getting narrow when they need to crowd the box but also making smart decisions to step out when they have adequate cover from midfielders Michael Azira and Sam Cronin.

Marc Burch is the first choice left back for the Rapids and Mekeil Williams usually plays at right back. When the cover is there they step out and close down attackers, preventing crosses from coming into the box but also positioning themselves to try and limit the danger from the other teams fullbacks overlapping.

Colorado plays defense first, so the midfield is always there in support, clogging channels and disrupting the attack.

Time and time again Colorado’s opponents have been able to get to the top of the 18 yard box but met with Cronin and Azira, ahead of a narrow back four, have to slow down their attack and pass sideways. If given time to set the defense up in its proper shape, Colorado extremely difficult to break down.

In closing:
Colorado team defensive performance this year as been first class – they are second best across MLS in limiting quality attacking by their opponent.  On the other hand – Portland is the highest quality attacking team in MLS this year.  Below is a diagram intended to show three things: CRFC opponents and PTFC penetration averages are the same.

CRFC opponents and PTFC shots taken per completed penetrating pass averages are near the same.

It should be a classic battle of a potent attacking team against a potent defending team.