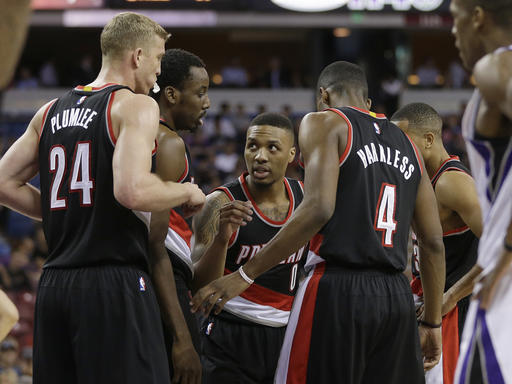 We are a mere handful of hours away from Game 1 of the NBA Finals as the Golden State Warriors and Cleveland Cavaliers will battle for the second season in a row. Stephen Curry and the 73-win Warriors go up against LeBron James, trying to get one for #TheLand. My podcast co-host Sean Highkin and I have a Finals preview that we recorded after the Warriors punched their ticket to the dance.

Now that we have our homegrown Finals content up front, let’s get to what you came here for: a collection of all the important stuff written on your Blazers this week.

We begin with ESPN’s Future Power Rankings, compiled by insiders Kevin Pelton and Chad Ford. As expected, the Blazers made a considerable jump after a second round appearance and battle against the Warriors.

While we were relatively optimistic about the Trail Blazers in September, they’ve still tied for the largest jump since then. Portland moved back into the top 10 after not only defying expectations by making the playoffs but winning a series (albeit aided by the Clippers’ injuries) and competing with the Warriors in the second round.

Now, the Blazers have the opportunity to clear max space while retaining their young core, led by the dynamic backcourt of Damian Lillard and C.J. McCollum. That’s possible because GM Neil Olshey locked up young free agents Al-Farouq Aminu and Ed Davis to contracts that look like enormous bargains.

The Blazers’ future is bright. However, success in the NBA is rarely cheap, this past season being an exception. Danny Leroux penned a detailed piece for The Sporting News on how the success of the Blazers could and probably will affect their cap sheet.  The Blazers are expected to swing big in free agency with the ability clear max cap space, but what Leroux nails is that keeping their own free agents will likely cost a pretty penny.

ESPN showcased the Blazers later on in the week when they released their “Famous 100,” a ranking of the 100 most famous athletes, based on an algorithm which includes salary, endorsements, social media following and Google search popularity.  Portland’s Damian Lillard clocked in at 45, just behind Blake Griffin (43) but ahead of fashion icon and elite guard Russell Westbrook (48).

The Blazers success has also earned them a guest appearance in the latest “Game of Zones,” which is Bleacher Report’s amazing NBA-themed “Game of Thrones” parody.

In actual important news that greatly affects the team but doesn’t really draw a lot of attention, the Blazers finalized their coaching staff on Wednesday. As part of the finalized coaching staff, assistant coach Dale Osbourne was promoted to the front of the bench and advance scout John McCollugh was added to the staff. Sought after assistant Nate Tibbetts, who interviewed for the Memphis head coaching job and the lead assistant job with the Warriors will stay, as well as David Vanterpool, the longest-tenured assistant on the staff along with Osbourne. Jim Moran, who was added to the staff last season to help coach the big men, will be back for his second season.

Erik Gundersen is the Trail Blazers beat reporter for The Columbian. He’s a graduate of the Allen School of Journalism and Communication at the University of Oregon in addition earning a degree in Spanish. He’s covered the NBA for four seasons. You can also occasionally find his work on ESPN.com’s NBA section for their TrueCities series. He also fist-bumped with Kanye West once. Follow @BlazerBanter on twitter for more Blazers and NBA news.