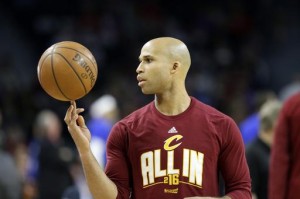 FILE – In this April 24, 2016, file photo, Cleveland Cavaliers forward Richard Jefferson spins the ball before the first half in Game 4 of a first-round NBA basketball playoff series against the Detroit Pistons, in Auburn Hills, Mich. With two series sweeps and a tougher-than-expected matchup with Toronto, the united Cavs have gone 12-2 in this postseason and are awaiting the Oklahoma City-Golden State winner in this years finals. (AP Photo/Carlos Osorio, File)