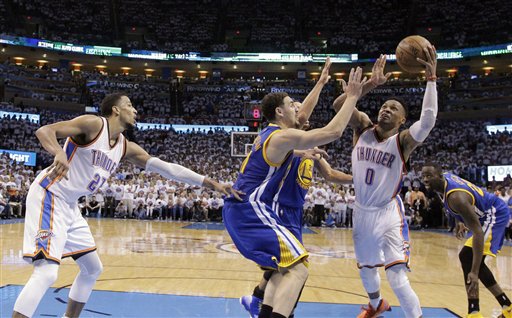 The brush fire is officially spreading. They are telling residents to evacuate Rome. The 73-9 Golden State Warriors are on the brink of elimination following another beatdown at the hands at the hands of the Oklahoma City Thunder. The Thunder lead 3-1, Game 5 is Thursday in Oakland and the Warriors have lost the last two games by 28 and 24 points respectively.

We discussed the defending champs being on their heels as well as the crazy plot twists on ‘Keeping Up with the Kavs‘. One of those great plot twists is that Kevin Love got benched in two straight games and Channing Frye has jumped him in the rotation.

It’s a whole new world in the NBA and it’s only Wednesday. The Thunder look like the favorites to win it all and suddenly, how in the world could Kevin Durant ever leave Russell Westbrook?

Of course, we talked about what the Raptors are doing so well to exploit the Cavaliers. Suddenly it looks like they are lacking a perimeter defender now that Lowry has thankfully flipped the script on becoming the NBA’s version of Chuck Knoblach.

Also, the last team come back from a 3-1 deficit to win the title was the 1995 Houston Rockets. Shout-out to Mario Elie.

We are working on a problem with our SoundCloud plug-in so to listen to one of our episodes please click on any of the above links.