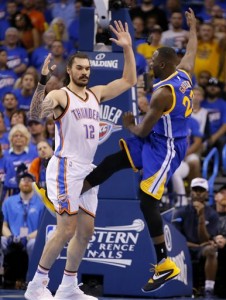 DELETES REFERENCE TO SUSPENSION – In this Sunday, May 22, 2016 photo, Golden State’s Draymond Green’s leg is between the legs of Oklahoma City’s Steven Adams (12) during Game 3 of the Western Conference NBA basketball finals in Oklahoma City. Green’s kick to Steven Adams’ groin could complicate Golden State’s chance to repeat as NBA champion. The Warriors trail the Thunder 2-1, and if Green is suspended the Warriors will lose plenty of All-Star muscle for Game 4 on Tuesday night) LOCAL STATIONS OUT (KFOR, KOCO, KWTV, KOKH, KAUT OUT); LOCAL WEBSITES OUT; LOCAL PRINT OUT (EDMOND SUN OUT, OKLAHOMA GAZETTE OUT) TABLOIDS OUT; MANDATORY CREDIT