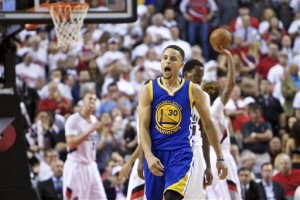 Golden State Warriors guard Stephen Curry reacts after scoring a basket against the Portland Trail Blazers during the second half of Game 4 of an NBA basketball second-round playoff series Monday, May 9, 2016, in Portland, Ore. The Warriors won 132-125. (AP Photo/Craig Mitchelldyer)