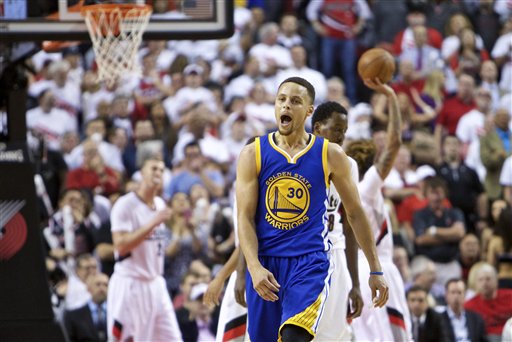 Reasonably, there were a lot of questions about just how good Stephen Curry would be in his return to the floor after missing two weeks with a knee injury. For most of Game 4, he looked to be shaking off rust. But then in the fourth quarter, he appeared to find his rhythm and he took advantage of some small miscues late to defeat a Blazers team that led several times in the closing moments.

I think as far as the keys for Portland to have success attacking the Warriors, very little has changed since Game 4. Even though Curry is in the fold, the Blazers can’t really change their plan. It will still involve a commitment to playing in transition, trust in the pass and confidence in their playmaking. A large part of that plan also involves going right at Draymond Green in the pick and roll.

Obviously the biggest tactical change in this series is the arrival of the MVP. The Warriors were down 16-2 when Curry entered the game. The first Golden State possession after he entered the game was a wide-open 3-pointer for Green. But this game was a hard fought game and the Warriors of course came back. Curry’s greatness was remarkable. And even after not having played for two weeks, Curry exploited even the smallest inefficiencies in the Blazers defense down the stretch.

The Blazers all gave credit to Curry, but they also felt like they should have closed out the game when they had a lead in the closing moments of regulation. They were all over him for most of the game and he mostly found success going to the basket.

Late in the fourth quarter, Curry started to exploit the Blazers defense as it seemed they were unclear as to what their strategy was on key possessions.

Curry had made his first 3-pointer of the game with 4:30 left and that’s when the trouble started, it got worse for Portland as the game went along. Here Al-Farouq Aminu doesn’t switch with CJ McCollum and there is a miscommunication which leads to Curry getting a massive amount of space to sink a 3-pointer. The flow of the game keeps going and Portland can’t really afford to call time because the Blazers have had a lot of trouble scoring against Golden State’s set defense. This play cuts the Portland lead to just one and on the next play, Aminu comes up but the message isn’t relayed to McCollum who fights over as if Aminu is going to hang back on the screen again. The result is a wide open lane for Draymond Green who ends up with a basket to give the Warriors the lead. Also notice here in both situations that Allen Crabbe is glued to Thompson, as he should be. The Blazers have to clean this up in Game 5 if they want any chance of sending the series to a Game 6.

I think everybody is expecting Curry to come out trying to make a statement early on in the game. Fresh of winning the MVP award and playing in front of the Oracle crowd for the first time since his injury, he will definitely be juiced. But the Blazers, at least Aminu in these pick and roll situations, whether for fatigue or just being used to playing the Warriors without him, gave up way too many easy looks to Curry.

The Warriors create chaos and Curry is at his best in those situations. Portland is also getting a lesson in the level of execution it takes to beat a champion. Curry actually hit better on contested field goal attempts in Game 4 but the Blazers can’t take stock in that. Their coverages weren’t rock solid all game and it wasn’t the reason Curry took over, but it certainly didn’t help them finish what was otherwise a great effort.

Before the Curry return, priority No. 1 on the defensive end was the shooting of Klay Thompson. Now the Curry-Green pick-and-roll is the new beast that sits at the top of the list.

Mason Plumlee returned to the series in Game 4. Foul trouble took him out of Game 3 early and Portland also had a lot of success with Ed Davis on the floor, especially against the Warriors’ small ball looks. Well, as much success any team can have against those units. Whether it was a coincidence or not, the return of Curry to the series also saw the return of an effective Plumlee. Early in Game 4, the Warriors made a change by putting Green on Plumlee. The Blazers had great success putting Green in pick and rolls with Aminu in Game 3. They Blazers tried to keep going at Draymond with Plumlee in pick and rolls late in the game. But Draymond was much better down the stretch when switched on to Portland’s guards.

Here he stones Lillard at the top of the key but it also helps that he doesn’t even have to think about recovering to get to his guy. Lillard uses Plumlee to run pick and roll and he finds him again in the middle of the floor to set up a dribble hand-off. Green caught him on a switch and manages to get a great contest on Lillard. It doesn’t get more difficult than that.

The Warriors are the heavy favorites to close Portland’s season on Wednesday night. But Portland also has the last three games, which gives them reason to think they have a real chance at extending the series.